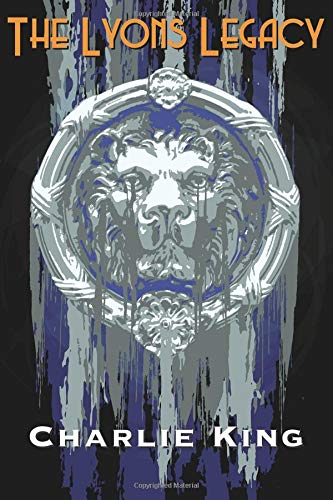 THE LYONS LEGACY by CHARLIE KING.

Ten years on from the events that took place inside The Lyons Orphanage, Sam is still no closer to finding his parents.

Sam takes a job at the Crown Prosecution Service to find clues about the identity of his parents by investigating the case against Howard Lyons, who was sectioned as a result of his actions.

Nicholas Lyons, stricken with illness, pleads with Sam to visit his brother and have him transferred to a prison for his crimes, to save Howard from the indignity of life in a psychiatric hospital.

This sets Sam on a path to learn all he can about the case but clean-cut Sam knows he’ll have to break a few rules to get to the bottom of it.
- Back cover Blurb (Contains spoilers. Please scroll  over text if you wish to read.)

A lot can happen in ten years; growing up, going through the education system, getting a driving licence and moving into my own place; a small, rented flat.
- First Sentence; Chapter 1

"If you were in my situation you'd understand," I said "I would have loved it if I actually was just a regular orphan with no sordid past to live with so I could be just like you two."

"But we can't all be lucky enough to have both parents dead and out the picture, can we?" I asked Gareth and Natasha. Natasha immediately stood up.

SOURCE ... Received from the author with thanks.

MY THOUGHTS ... Hurrah! As I'd hoped, a follow up to The Lyons Orphanage ... if you haven't already done so you really need to read this first in order for The Lyons Legacy to make total sense.

Its great to catch up with old friends (and foes) - even if events do take place some ten years on from when we last met them - in a book that, written from the point of view of orphan Sam, like its predecessor, is a bit of a slow burner ... albeit one well worth sticking with

There's some captivating plot developments and the character's personalities (Sam's in particular) have matured considerably (as has the author's writing though I do think some further editing could prove beneficial), the introduction of fellow mind reader, Liv, adding a whole new and interesting dimension.

Whilst on the one hand this instalment concludes Sam's story nicely, there is a bit of me that thinks there was something about it that suggested a whole new episode could be in the pipeline. I certainly hope so. And if not ... I look forward to seeing what this author has to offer next.

Posted by Felicity Grace Terry at 17:06

I'm still not sure if this is one that particularly appeals to me. I hope for your sake that a third book is in the works.

Both books sound very good. Sequels, that take place years after the original stories, have a lot of dramatic potential. Evan more so If the characters have grown up along the way.

Glad that this follow up story met with great success for you. It will be a good sort of anticipation to see if more is coming.
Another one for my list to try. :)

Tracy, thanks for your honest review. It sounds like you enjoyed this, so I hope there'll be a sequel, or at least another book by this author.

Tracy,
After your review of The Lyons
Orphanage, I added the book to
my list. I still want to make
Sam's acquaintance, but I willl,
as you suggested here, first start
with The Lyons Orphanage.
But thank you for your honest and
excellent review.
Raven

Sounds like fans of the first book will be very pleased with this addition!

Sounds like a book you enjoyed. Hopefully there will be more from this author in the future.