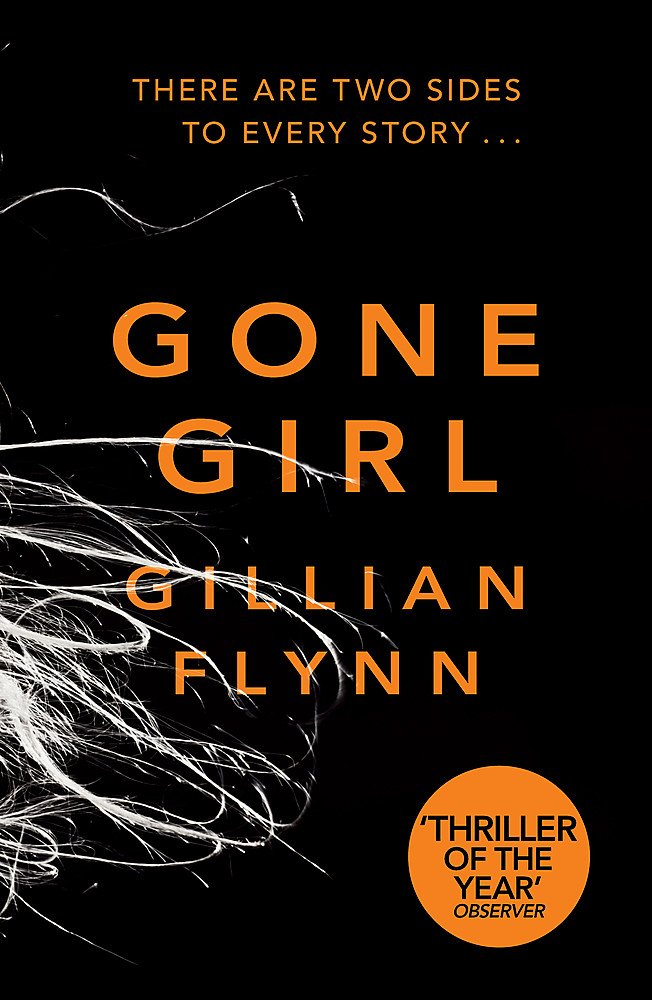 There are two sides to every every story ...

Who are you?
What have we done to each other?

These are the questions Nick Dunne finds himself asking on the morning of his fifth wedding anniversary, when his wife Amy suddenly disappears. The police suspect Nick. Amy's friends reveal that she was afraid of him, that she kept secrets from him. He swears it isn't true. A police examination of his computer shows strange searches. He says they weren't made by him. And then there are the persistent calls on his mobile phone.

So what really did happen to Nick's beautiful wife?
- Back Cover Blurb

When I think of my wife, I always think of her head.
- First Sentence; Part One

It was the woodshed behind my sister's house - a place to stow lawn-mower parts and rusty tools - a decrepit old outbuilding, like something from a slasher movie where campers are slowly killed off. Go never went back there; she'd often joked of burning it down since she moved into the house. Instead she'd let it get even more overgrown and cobwebbed. We'd always joked that it would be a good place to bury a body.

I drove across town, my face numb, my hands cold. Go's car was in the drive way, but I slipped past the glowing living room window and down the steep downhill slope, and I was soon out of her sught range, out of sight of anyone. Very private.

Back to the far back of the yard, on the edge of the tree line, there was the shed.

I opened the door.

MY THOUGHTS ... Alas a book I just don't rate as being any good. Hardly surprising given that I'm not a fan of novels written in diary format (as was some of this novel) but it went way beyond that.

Characters I just could not get into. Arguably a protagonist we 'love to hate' but I'm afraid my disliking one aspect of a character (and how I hated Nick's misogyny .... Women have “girl brain[s]” and female scents, “vaginal and strangely lewd” ... Ugh!) is simply not enough for me to enjoy them as a character.  More than anything else though, what I really, really disliked about the writing of the characters was they just didn't grow; they just remained self-absorbed caricatures.

Infuriating. Whilst Nick and Amy may not have changed everything we thought we knew about them changes in the second part of the book. Clever, eh? Err, no! To think I'd ploughed my way through chapter upon chapter of what I'd describe as an unrelenting miasma of gloom and toxicity only to discover little was as I thought it was ... Aggghhhh!

Totally bewildered! What is it with Nick and his constant refrain of 'fucking bitch' (Aggghhh! There's that word again), his sister Margo (aka Go) constantly pointing out how all women are insane, their father, his 'deep hatred' having rubbed off onto him as Nick would admit, Heck! Even Amy herself with her promises never to make her husband into a 'dancing money' like those 'other' women'? Why did EVERY major character whatever their gender seemingly dislike women.

Essentially not nearly as deep or as dark or as powerful or as profound a read as I'd hoped it would be. But it seems I'm in the minority in thinking so which just goes to prove that what one reader will hate the next reader (and the next and the next if this particular novel is anything to go by) will love.

Posted by Felicity Grace Terry at 18:29

Until now I felt in the minority on this one. To be fair, I didn't read the book. I saw the movie and wasn't impressed. I kept wondering what I was missing because there was so much buzz around it.

I have been curious about this book. Though some people loved it I have heard a few others disappointed as you were. I have not seen the film either. I might give it a try.

I seem to remember I really enjoyed it at the time I read it, though I must have tuned out all those F-words since gratuitous profanity and sex usually bug me. I think I saw the film, as well. Honestly, though, neither book nor must have made too great an impression in that I don't remember many plot details.

Hopefully you're on to something better now.

I hadn't seen the movie or read the book, but after reading your review, I don't think I'd care to. I'm not a fan of excessive profanity, either.

i loved the movie and the book but we each have our own likes and dislikes. better luck with the next book
sherry @ fundinmental

I can see how some people wouldn't like this but I enjoyed it when I read it.

I thought I was very much in the minority, not yet having read this book, or watched the film.

Whilst I always really appreciate your candidly honest reviews, I really want to read this one for myself, although I might live to regret that decision!

I am also not one for repetitious dialogue or too much profanity, in fact the book I am currently reading is coming pretty close to the mark on both counts, so I might leave it for a while before I begin another book with a similar writing style.

Goodness...of all the feedback I have hard about this one, they failed to mention a few of your points...hence why I LOVE the blogging/reviewing world! Thanks for sharing!

I love this review, Felicity! I really liked the book myself, although I don't fall in the category of those who might think it profound or powerful. I found it deliciously dark and disliked both of the protagonists immensely, but Flynn had me hooked and I couldn't tear myself away. Still, I saw the big twist coming from a mile away. Oh, and the ending . . . I felt sick to my stomach when I read those last pages. There definitely was no character growth.

Felicity,
Thank you for your honest and
heartfelt review. With what you
said about the misogyny, rhe
lack of growth of the characters
and the bad language. I do not
think that I would appreciate
this book.
Raven