AKEA: THE POWER OF DESTINY.

Today I'm honoured to be sharing my thoughts on a book by another talented young author. Now aged twenty-one, Akea was written by the then fourteen year old Elizabeth Jade who 'stumbled into writing when she began to suffer from anxiety and depression'.

I'm hoping get to know Elizabeth Jade a little better when she guests on Pen and Paper (if you have any questions you'd like me to put to her please leave them in the comments) but in the meantime you can read more of her life story here.  FGT 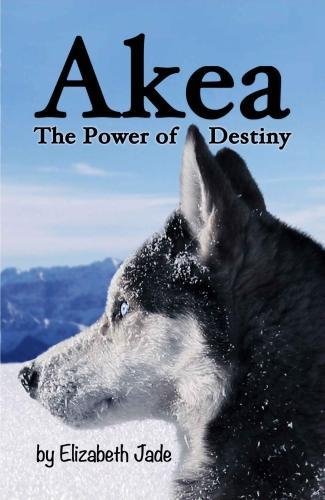 AKEA: THE POWER OF DESTINY by ELIZABETH JADE.

This husky, wolf story is a new addition to the great animal fiction tradition of Jack London and Erin Hunter, where the story is told through the eyes of the animals. Elizabeth Jade has created a captivating coming of age story which also teaches children about friendship and loyalty, and that being different doesn't mean you can't belong. It is a captivating chapter book for eight to twelve year-olds. Akea is born into a family of sled dogs and a life that follows a predictable path, but from the day she first sees the lone wolf, Kazakh, Akea knows her future lies beyond the safety of her home. Kazakh is well aware of Akea's destiny and the pack laws he will break to help her reach it. Regardless of the challenges ahead, he must make sure this young husky will be ready, even if it means his life.
- Amazon.Co.UK Blurb

The sun rose slowly over the treetops, its amber light doing its best to soak up all the dew.
- First Sentence; Chapter 1

One quiet afternoon, however, while the owner was out, she slipped away from the others and sat staring at the forest now covered in snow, wondering what had become of the wolf. With a heavy sigh she joined her family in the shed and lay down sleepily by the dog flap. Suddenly in the distance a howl broke the silence, ....
-Memorable Moment; Page unnumbered

SOURCE ... Received with thanks from Elizabeth Jade's mum had had sent a copy of the manuscript.

MY THOUGHTS ... Written by the then fourteen year old Elizabeth Jade, Akea is a powerful story written with a wondrous sense of reverence. A tale
that's bound to attract all animal lovers but is particularly appealing to its target audience of eight to ten year olds.  Parents of younger particularly sensitive children might want to give the book a read through first as there are one or two darker scenes that though handled extremely sensitively and in the main are largely hinted at rather than too graphic might still prove upsetting but then again ... an unavoidable part of this kind of setting, a great starting point with which to begin discussing some of the situations/issues raised???

A coming of age story with a difference ... and yet is it?

A story of what it is to be true to ones self, of what it is to persevere despite what might seem like insurmountable odds. I loved that whilst Elizabeth Jade gave a voice to the animals she resisted the temptation to over-humanise them; thought it clever that whilst their innate wild nature was respected they were written so that young readers could relate to them, would grow to love them and want to follow their adventures.

Young though she may be I can see a wonderful future ahead of this young lady. Her writing is fresh; she has a wonderful feel for both plot and (more importantly to my mind) character and her knowledge of pact mentality is impressive.

... And then of course there are the magnificent often dramatic illustrations.

Thank goodness then that the second book in the series, 'Akea - His Mother's Son', is currently being edited.

Posted by Felicity Grace Terry at 17:34

It is so impressive that the author was so young. I am glad to hear that the author conveyed the wind nature of the animal. I suppose stories of this sort inevitably have some dark parts.

This young author sounds quite talented! I agree with all that Brian said, especially about not over-humanizing the animals. I like the photo and, of course, would like to know about her canine friend pictured with her.

Sounds great and the mention of Jack London definitely spikes my interest! Read a lot of him in my school days...AND enjoyed it! Thanks for sharing!

Felicity,
Elizabeth Jade sounds like a very
talented young author. And thank
you for your excellent and
enthusiastic review.
Akea sounds like a great story
and I will add it to my list. And
I really like the cover.
Raven

Hi Kelly and thanks for your lovely comments. The dog pictured is our flat coat border collie, Nala. She came from a rescue at 6 mths of age and is now 3.
Due to her Aspergers and anxiety issues, I help Elizabeth with her website www.elizabethjade.org and social media - @AkeaWolfStories
We hope you will join us. X

Hi Brian, On behalf of Elizabeth Jade, thank you for your comment. Due to her Aspergers and anxiety issues, I support her with her website and social media etc. Her head is full of adventures for these huskies and wolves. It's no wonder she has trouble sleeping... ��

Wonderful review of what sounds like a wonderful book! I've added it to my wishlist.

I look forward to reading the author's guest post! I do love stories involving animals and this sounds like it is a good one.