THE MORGANS AND THE JEWEL OF BAR-RAN. 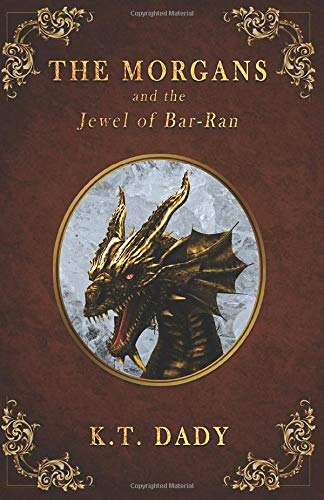 THE MORGANS AND THE JEWEL OF BAR-RAN by K.T. DADY.

Your world isn’t the only one that exists. There is another, a magical place called Bar-Ran, and it’s about to be destroyed unless the Morgan children can find the royal dragon and replace its heart.
- Back Cover Blurb

You wouldn't expect much to be going on at two o'clock in the morning in a quaint, little English town, would you?
- First Sentence; Intro

Up above the children's heads, floating all around an ornate chandelier, were silver knives and forks, spoons of many sizes, and a silver tray. All of the items Meg had earlier placed on the dining table.

MY THOUGHTS ... A book that the child I was would have loved and one I, as an adult, found pretty special too.

A story that whilst not exactly ground-breaking DID provide some much needed escapism ... to say nothing of a sprinkling of magic.

Great characters; each and every one of them ... though I have to admit I had a soft spot for the Willy Wonka of this quaint English village, Denver Darlington, creator of (amongst other things) such 'delights' as Turnip & Custard, Carrot & Cinnamon, Lemon & Onion (the list goes on) candy canes.

I loved that each of the children was well defined; quirks and all. That they (my concerns that having five protagonists each with their own voice might prove too much unfounded) were given their turn in the spotlight.

And then there were the 'other world' characters.

Totally smitten by (apologies for what may be considered a spoiler but how could I not mention the Linkets?) ... the messengers of Bar-Ran. Just one of the many fantasy characters that inhabit the pages, I thought these small mouse like creatures with a face like a human (except for their pink mouse noses) who, having their own language, need a mothadotharum for translation purposes, simply adorable.

An author well worth looking out for if your child (or indeed you yourself) is into fantasy novels. I'm already eagerly awaiting book two.

Posted by Felicity Grace Terry at 13:07

It sounds like it works on pretty much every level. I don't think any of mine are quite the right age for this one - either too old or too young.

Love the sound of this one! Terrific review, Felicity!

Felicity,
I am glad that you enjoyed this
book so very much. It sounds like
a great story with truly memorable
characters. And I will definitely
keep it in mind.
Raven

is that a dragon i see? sounds like a fun read. glad you enjoyed it
sherry @ fundinmental

This sounds good and yes I can see myself enjoying this as well.

This does sound like a fun one that I'd have loved as a kid.

Although I have read one or two YA fantasy stories and enjoyed them, this isn't a genre which really holds my attention that much.

It is probably not a story I would have chosen to read as a child either, although as there are a group of five children in the story, I guess this could be the modern day equivalent of 'The Famous Five' stories, updated for a new young audience?

I can imagine this making a good series read and I do like the cover art, so thanks for sharing :)

I love fantasy books and this one sounds like one I would love. I haven't heard of it before- so I am happy you put it on my radar. :)
~Jess

I'll have to keep this in mind for my daughter and I to read.