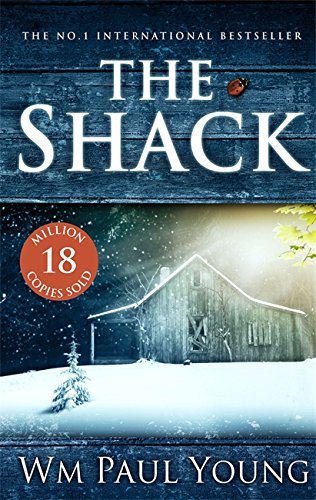 THE SHACK by WM PAUL YOUNG.

Mackenzie's youngest daughter, Missy, has been abducted during a family vacation and evidence that she may have been brutally murdered is found in an abandoned shack deep in the Oregon wilderness. Four years later,  in the midst of his Great Sadness, Mack receives a suspicious note, apparently from God, inviting him back to that shack for a weekend.

Against his better judgement Mack arrives at the shack on a wintry afternoon. What he finds there will change his life forever.

In a world where religion seems to grow increasingly irrelevant THE SHACK wrestles with the timeless question, 'Where is God in a world so filled with unspeakable pain?' Mack's experiences when he faces up to his darkest nightmares will astound you, and perhaps transform you as much as it did him.
- Back Cover Blurb

Who wouldn't be skeptical when a man claims to have spent an entire weekend with God, in a shack no less?
- First Sentence; Foreword

For my Memorable Moment please read My Thoughts below.

MY THOUGHTS ... Largely thought of as 'Christian Fiction', I'll grant you The Shack may seem an odd choice for a non-believer but you'd be surprised.

Not someone who has read a copy of what is reputed to be the eighteen million copies sold?

I'll try my best not to include any spoilers even if that means I don't fully justify my reasons for not liking this book which, by the way, go way beyond the fact that as a non-believer I was bound not to enjoy it.

Full of platitudes on forgiveness (forgiveness being the central theme of the book) the likes of which can be found on any number of FaceBook memes or fridge magnets bearing 'inspirational' quotes.

Unashamedly predictable and clichéd. OK! Soooo it could be argued that depicting God as he does the author is challenging our notions of just who God is but ...

For goodness sake! A big-bottomed, sassy black woman who is never happier than when in the kitchen, really?

Now whilst I can't say I thought the author depicting God as he did was idolatrous or heretical or blasphemous (though I can understand why some Christians might) nor did I think it novel or cool or groovy (though I got the feeling the author probably did). I did however think that it was an outdated, sexist stereotype penned by a white man whose notion of black women is pretty questionable/straight out of an old movie - I can't quite make up my mind which.

My being overly judgemental or overly sensitive? The author not using lazy stereotypes?

Jesus laughed. "I am Jewish, you know. My grandfather on my mother's side had a big nose; in fact, most of the men on my mom's side had big noses." - Pg 111

Try telling me that wasn't blatant stereotyping. And it didn't end there ...

Mack's dad? Of Irish descent ... he's a drunk but then of course he would be. Aggghhhh!

Posted by Felicity Grace Terry at 11:16

As a believer, I'm always open to reading Christian fiction and non-fiction and I know I read this book when it came out - but honestly, I couldn't recall much about it until I read your review. I don't remember disliking it, but by the same token, I don't remember thinking it was wonderful. Maybe just different?

I remember when this was so big. I figured it wasn't for me and it sounds like I was right.

Tracy,
I didn't read this but saw the movie a few years ago. Thank you for sharing your honest thoughts. I don't like stereotypes, especially negative ones!

As a total non-believer, this isn't even one which would be on my radar.

With the rather racist, misogynist quotes you felt compelled to redact, I definitely wouldn't be reading it anyway, talk about stereotyping!

The book is certainly one of those 'marmite' reads - you either loved it or hated it and the reviews are very split between the two camps.

Your candid way of reviewing is very refreshing and that's what makes the whole thing about reviewing quite subjective, IMHO - as a story which one person doesn't connect with at all, might be a fantastic read to the next person, and vice versa.

I was almost expecting this to be a humorous story, but soon realized that I was meant to be taking it seriously!!

Thanks for sharing and enjoy your weekend :)

As you know I am an atheist. However, I am fine with thoughtful and reasoned arguments for the existence of God and for religion. In fact I am curious about such arguments and like to read books and talk to people about them. However, I hate platitudes and simplistic interpretations. This really does not sound worthwhile.

Tracy,
I belong to the total non-believers,
but if a book is thought provoking
and interesting, I would like to read
it.
But I will avoid this book, and thank
you for your honest and excellent review.
Raven

Thank you. I read this book years ago at the suggestion of someone who loved it. I disliked it and found myself rolling my eyes frequently. The stereotypes bothered me and the whole story just didn't sit right. It was surprising how many people loved the book and I wasn't sure if no one else was seeing what I was seeing. Great review!
~Jess

Terri @ Alexia's Books and Such said...

I've had this book recommended to me more than once by well meaning friends and family, but it's not my type of book at all. Out of curiosity, I watched some of the movie when it was on TV not that long ago. I'm not sure how closely the movie followed the book, but I thought the movie was ridiculous. The stereotypes. The preaching. The holier than thou attitude. Not my cup of tea at all! Another well done review!