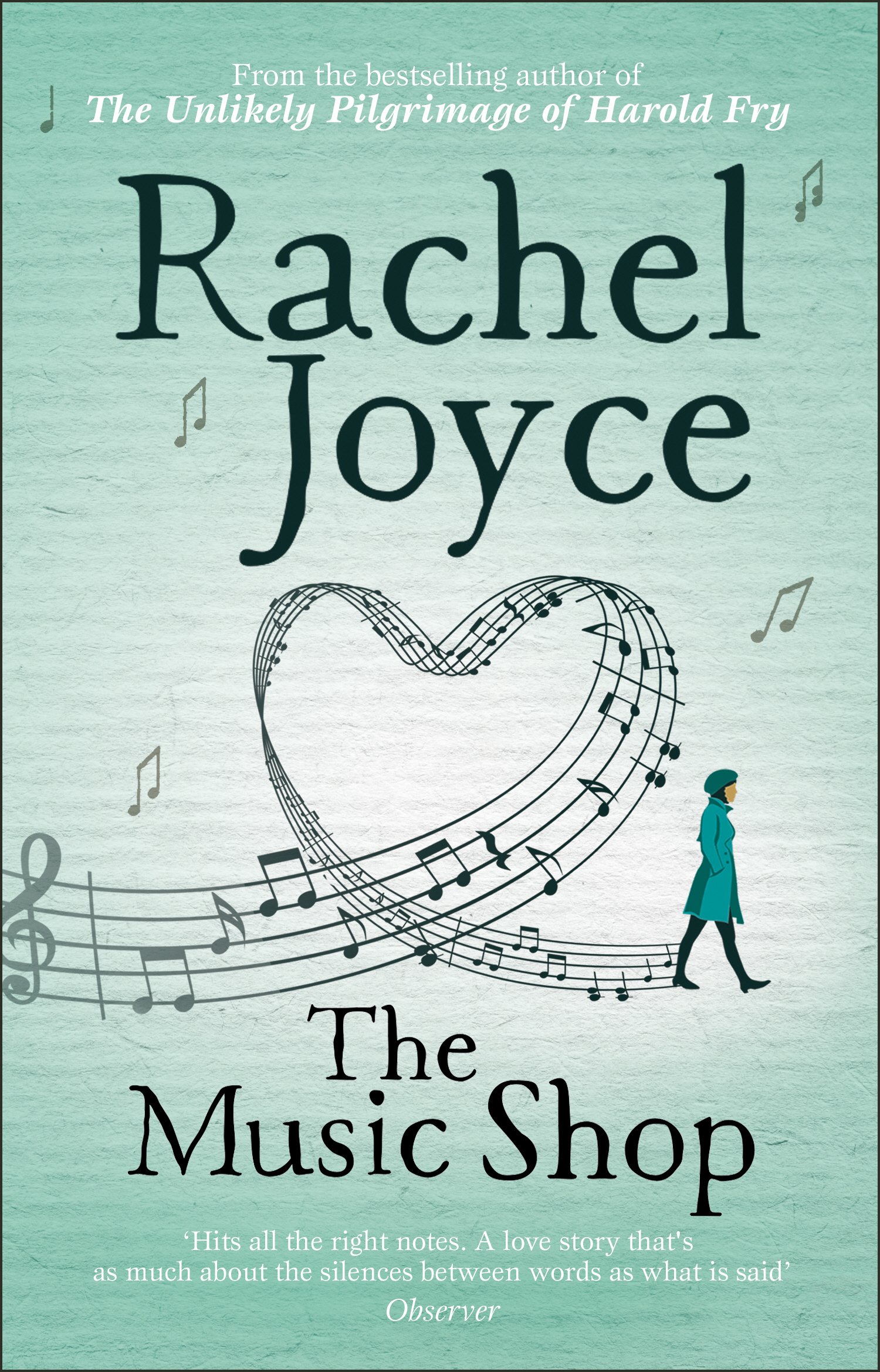 THE MUSIC SHOP by RACHEL JOYCE.

1988.
Frank owns a music shop. It is jam-packed with records of every speed, size and genre. Classical, jazz, punk – as long as it’s vinyl he sells it. Day after day Frank finds his customers the music they need.

Then into his life walks Ilse Brauchmann. Ilse asks Frank to teach her about music. His instinct is to turn and run. And yet he is drawn to this strangely still, mysterious woman with her pea-green coat and her eyes as black as vinyl. But Ilse is not what she seems. And Frank has old wounds that threaten to re-open and a past he will never leave behind.
- Back Cover Blurb

There was once a music shop.
- First Sentence; Page 1

Her opinion was that a big maan like Frank needed a big smell like Jovan Musk; it was dead sexy. Frank was about to explain that really he didn't need to smell  sexy, he just wanted to smell normal, when she whipped out a tester bottle from beneath the counter and shot him with a scent so powerful it penetrated his nose with the force of paint stripper. It wasn't just sexy, it was obscene.
- Memorable Moment; Page 129

MY THOUGHTS ... Having first come across this author when I read her debut novel The Unlikely Pilgrimage Of Harold Fry, a book that 'captured my imagination, heart and soul from page one', alas like Perfect (the third of her books to be published and the only other one that I have read) The Music Shop (the fourth of her books) failed to engage me in the same way.

An OK read. The premise - an 'odd ball' shop proprietor (one in a street full of them) with a passion for vinyl finds the exact record that his customers not so much want as need falls in love; his favourite tunes the soundtrack to his pursuit of this  woman - quirky but falling short of the feel good read that I'd hoped it would be.

A slow read, lacking in momentum; between the 100 or so pages in which the characters merely wonder about the mysterious woman who faints outside Frank's shop, the repetition that sees Frank's childhood self learning about music from his mother only for (the now adult) him in turn to deliver the self same message to various customers and the fact that the author feels the need to explain things in minute detail nothing much actually happens and what does happen is drawn out to the point where its small wonder that I found myself falling asleep book in hand.

The secondary characters largely more interesting than the major, I'm afraid I found protagonists Frank and Ilse somewhat one dimensional; the former with his habit of 'mansplaining' things irritating beyond words, the latter, what I can only describe as flat.

Still, two stars; surely I must have found something at least vaguely enjoyable about this novel ... or was I just feeling more generously inclined when I rated it a week or two ago?

There's the story of community at the heart of the novel and, most of all, there's the fact that I'm a sucker for the 'underdog' and there are plenty of these the author having filled the niche for socially awkward characters.

Posted by Felicity Grace Terry at 09:49

Email ThisBlogThis!Share to TwitterShare to FacebookShare to Pinterest
Labels: A Novel (re)View, her, Modern Fiction, Talking Of Books

I love the fact that this is set in a record store and I love the description of what the protagonist does. Slow moving does not usually bother me as long as the characters or writing is interesting. It does sound like it has some short comings however.

Thanks for your honest review, Tracy. I hope the next book you pick up is utterly captivating.

Tracy,
Although I appreciated the premise of
a music shop I am truly sorry that this
book was a disappointment to you. And as
always I appreciated your honesty.
Raven

I like the idea of a story set around a music shop and I thought the blurb sounded pretty good. A shame it didn't live up to its promise.

I liked 'Harold Fry' so I'm sorry to hear this book fell short for you. I think I have it on my bookshelf.

See this is a case of what disengaged you from the read is what is drawing me to it. Might have to give it a go. Thanks for sharing!

I've read The Unlikely Pilgrimage of Harold Fry, but have yet to read any of Rachel's other books. I'd give them a go though.