OF KIDDIES AND CRITTERS.

In her G2 column, The View From A Broad, Laura Barton mentions her uneasiness over .......
Princess Prep, a London-based fairytale finishing school aimed at the American market.
"All little girls dream of becoming a princess," the website dribbles, alongside promises of tea at Kensington Palace and a royal wedding walking tour.
For nearly $4,000 your daughter can be taught how to curtsy, use an egg cup, and discuss Princess Grace of Monaco with authority. - The Guardian (05/04/2011) Click HERE to view the Princess Prep site.
And talking of little girls research has shown ......
HAVING TWO DAUGHTERS IS KEY TO A HAPPY FAMILY. Two girls make for the most harmonious family life as they are unlikely to fight, will play nicely and are generally a pleasure to be around.
It also emerged two girls rarely annoy their parents, make limited noise, often confide in their parents and are unlikely to wind each other up or ignore each other. Whilst browsing the papers I came across this fun column in the Guardian's education supplement, entitled Improbable Research. This week it looked at a study, Effects of Group Size And Personality On Social Foraging: The Distribution Of Sheep Across Patches, which appeared in the Behavioural Ecology journal in 2009.
By contrast, doubling the number of daughters is likely to lead to a whole world of pain, the report found. - The Telegraph (08/04/2011) Click on link above to see more positives and negatives.

IS THAT A SHY SHEEP, OR A BOLD SHEEP? To know why certain sheep cling to each other while others split off on their own, a person would need to know the size of the group, and also something about the personalities of the individual sheep. Scientists at the Macaulay Institute in Craigiebuckler, Aberdeen, sought this very knowledge when they looked at the loiterings of sheep.
Four scientists observed the meanderings of 58 female Scottish Blackface sheep in fields, under tightly controlled conditions. First they gave each of them a personality test (wipes tears of laughter from eyes) noting which were bold enough to explore objects with novel smells (lavender, mint, thyme, marjoram, garlic, or coffee) and exotic shapes (a baby's rattle, a bottle brush, and various baby's teething rings).
Then they let the sheep loose, in groups of two, four, six, or eight, in grassy arenas that each had some patches of especially desirable greenery.
In the scientists' view, the sheep faced a dilemma: "In our study, sheep faced a trade-off between maximising their access to a preferred, but limited, resource and staying together as a group."
More often than not, groups broke apart. And here personality came to the fore, say the scientists: "bold sheep ... tended to split into subgroups at smaller group sizes than shy sheep". - Marc Abrahams, The Guardian (05/04/2011)
Sticking with our four legged friends ........

INTRODUCING LUNA THE COW THAT THINKS ITS A SHOWJUMPING HORSE. Responding to commands such as 'go', 'stand' and, gallop, two-year-old heifer and her owner, Regina Meyer, 17, regularly jump over makeshift hurdles of beer crates and logs. 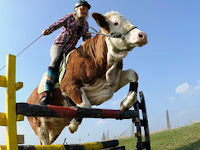 How have the rest of her herd taken to this heifer with unusual talents? “Cows don’t really like her,” admits the teenager, “they’re jealous because she always gets goodies.”
And horses? “Some run off in fright, but others often go along with it. She enjoys that and gets totally into it,” added Regina. - Lianne Kolirin, The Express (06/04/2011)
Doggone! I know we Brits are supposed to be a nation of animal lovers but ...... is this woman barking mad?
DOG OWNER SPENDS £20,000 ON WEDDING ......... FOR HER DOG.  The bride wore a white dress decorated with 1,800 Swarovski crystals and accessorised with a pearl necklace.
And as she trotted into the room to the wedding march, played by a harpist, she was met by the groom, smartly dressed in a tuxedo.
Afterwards, 80 guests enjoyed a sumptuous buffet in a marquee adorned with £4,000 of flowers, balloons and decorations. - Andrew Levy, The Daily Mail (07/04/2011) 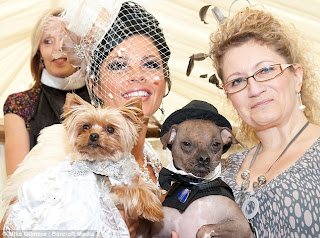 Too much monkey business?
Keepers at London Zoo are smearing sunglasses with a bitter-tasting apple substance to deter their Bolivian squirrel monkeys from stealing those worn by visitors. - the Telegraph (08/04/2011)
PLEASE NOTE: Wherever possible I Will endeavour to bring you the links to articles I have used in my Media Monday posts but this is not always possible.

Posted by Felicity Grace Terry at 09:31

LOL
I have to disagree with the second article. My sister and I would fight all the time as kids - both of us would drive our poor parents crazy. Haha

sorry am not regular here..family relocation holds me up..but should be ok in a week..how u doing friend? tc..wishes always..

LOL, what a bunch of croc about two girls being harmonious! It is like world war three in my house most days as my two try to murder each other. That just made me laugh completely.

But I probably think that it is the same case because me and my brother used to fight like nuts!!! But then he would always come and say good things as he is older by 2 years and we used to make up only to resume our fights again after a brief lull!!
Have a nice day Tracy:)

The article about the cow was in our paper over the weekend and I LOVED it!!! In fact, I was thinking about doing my own blog entry about it.

Oh...and the person talking about having two girls doesn't know much about girls. I've known plenty of sisters that fight! Both verbally AND physically! Now my sister and I never did, but we're 14 years apart in age.

Umm..is it just me or does the dog groom look a little peeved..??
Great post Tracy...always count on you for a smile.

Oh, how funny that cow image made me laugh! haha! Great article, I loved it!

You know I used to laugh at people who dressed their dogs... then I got a doberman. Now I have to dress him in sweaters and coats during the cold season. However, I draw the line at crystals and pearls! lol

The dog wedding is just too much just think of what could have been done with money!!!

The dog wedding and the princess prep were just ridiculous. I lived near a sheep farm and I'm sure most of what they learned they could have gleaned from just asking a sheep farmer. :)

As for the two girls theory, I have a hard time believing it. I was the youngest of three girls (my sisters are 5 & 7 years older than me). They were constantly fighting and bickering - not a moment's peace. Granted, we were three instead of two, but I still don't buy it.

My powers of observation are picking up on an Animal theme here! Just call me Psycho--....GREAT POST!

Love this (mostly) animal post! I may need to "steal" that jumping bovine for my cow blog. The wedding for the canines is outrageous, and the sunglasses-stealing monkeys are hilarious!!

Petty, you certainly have a knack for zeroing in on the oddest--and most humorous--tidbits.