HAVING A LOVELY TIME.

HAVING A LOVELY TIME by JENNY ECLAIR. 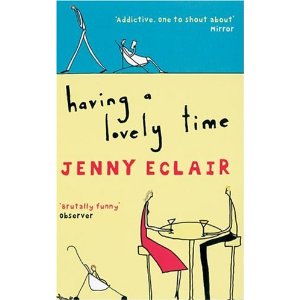 Meet the Dobsons and the Jamesons: two families on the verge of  nervous breakdown.

Joe Dobson left his wife and kids when is young girlfriend Nina discovered she was pregnant. Now he feels like a cliche and Nina feels like a drudge, swapping her wild nights out with friends for mild nights in wiping baby sick off the carpet. So when Joe announces that he's booked a luxury holiday in Italy, Nina is thrilled - until she realises Joe's kids Saul (11) and Tabitha (13) are coming along for the ride.

Guy Jamieson is sure this will be his last family holiday: he plans to leave his wife Alice and their two sons on his return. Guy is a high-powered advertising director, and Alice - with her elasticated skirts, inedible mince suppers and unshaven legs - just doesn't fit his image. But Alice, unaware of Guy's scheming, has a secret plan of her own: to have another baby.
........ Outer back cover.

FIRST SENTENCE (Chapter 1): Guy Jamieson is on his way home.

MEMORABLE MOMENT (Page 57): As for jigging up and down on the spot, there isn't a sports bra in the world that can make that a pleasurable experience.

KEEP IT OR NOT: Not.

Remember my reviewing SORTING OUT BILLY by Jo Brand earlier in the year? Well, like Jo, Jenny Eclair is a comedienne who has diversified into writing novels.


Having A Lovely Time was at times wickedly funny and had the potential to be a good read BUT for me it was spoilt by the use of crude (and at times really crude) language and an ending that I found both shocking and harrowing - not to go into great details but the concluding chapters included an act I found totally abhorrent and yet because it was committed by a woman (Alice), the victim being her drunken, semi-conscious husband (Guy), as opposed to the other way around there seemed to be the feeling that this was acceptable. What was the author thinking?

That aside, the characters, whilst being funny at times, were caricatures of the middle-aged man having a mid-life crisis, having affairs when ever the opportunity arose; of the young girl who finds herself pregnant by one of two men; of  the frumpy middle-aged wife who has 'let herself ago' - not particularly likable any of them, even the children, to varying degrees, were fairly disagreeable - it was really only Dieter and Peter, the two homosexual German men, who I really warmed to despite their being total stereotypes.

A Book Exchange read, this is the 36th book in my 100+ Reading Challenge.

Posted by Felicity Grace Terry at 12:00

Sorry it didn't work for you. Crude language becomes boring most of the time.

I really can't get into books with crude language, especially when it's overdone. I will be avoiding this book.

Crude language used in books as a kind of form can be really annoying.
Certainly not a book I'd like to read.

Thanks for your visit and sweet comment; it really means the absolute world.

Have a great rest of your day!

Hmm..language does play an important role in life too..so if one has toread something one would indeed wish for something more pleasant than real life..at times to escape.
Nice review PW..and somehow makes me want to read the book :)

ya...crude languade really spoil the mood of a book. Am reading Gone Bamboo by Anthony bourdain now. Stucked. There are quite a bit of four letters words.

Interesting story.Fit for a Bollywood movie.

See it's the whole crude thing that gets me. To each their own but in my opinion, you can accomplish so much without it and still appeal to a wide (if not wider) audience. Thanks for sharing...better luck on your next read.

Great, honest review, Petty. This doesn't sound like my cup of tea at all.

(P.S. Thanks for posting my giveaways.)

Hm... not into stereotypes. I get it for the comedy flair but it is a fine line to walk. Great review.

I can tolerate profanity in certain situations, but I have a feeling this one would bother me, too.

Thanks for an honest review.

Aww.. I totally like the cover but it's a let down to know it's not a keeper.

too bad it was a let down. I dont like crude language.