One of twenty one bloggers (see below for the links) participating in the 2019 12 Days Of Clink Street Publishing Tour, today I'm delighted to share my thoughts on The Learn by Tony Harker which is just one of the many books published  by Clink Street (a link to which can be found by clicking here).

Blending reality, history and legend, about a time when women were considered as important as men, taking power in an oral society that worships the Goddess. A whole Celtic Druid world is laid out before us, incorporating beliefs, technology and the natural environment.

A Celtic boy, a beach scavenger, is pledged to the Learn, a life of endurance, a path to become sworn Druid: scholar and warrior.  Young women and men progress, becoming Priests and Druidii. Friendship, affection, passion and care develop as novices mature, confidence emerging.

Seasonal battles of winter and summer bring rich festivals when seeds of men are taken by women in pleasure to prove fertility. Small damaged, hurt peoples on the margins of Celtic society blend in and out of vision.

At frontiers with Nature, dependent for everything on what the earth gives or takes, an emotional response to the natural environment defines who people are and the values they live by.

A lyrical novel resonating with modern readers through portrayal of character, language and history; arising from a landscape of today, yet centred in the Celtic Bronze Age of North Wales.
- Summary

Stream spirits are winning their battle with rocks when I reach the flow; the rocks are small and rounded, a few are angular, recently broken as they are driven down, the stream is low, but has been higher. I cross with care where stones and rocks have won temporary battles with the water, making solid foundations offering me firm footing well used by others.
- Memorable Moment; Page 83

SOURCE ... Received with thanks from Faye at Authoright.

MY THOUGHTS ... Initially a bit hard to get into, the prose perhaps a bit too flowery for my liking (but then that's down to personal taste), the writing a bit dry and yet, that said, the author does manage to bring the sights, the sounds, the smells (or at least what we know of them) alive.

Following the spiritual journey of Owayne from scavenger to priest, set at a time when the natural order was revered; the story of new beginnings as the established, the 'old', is weighed against the new.
For me the book's strength lay in this fascinating journey of enlightenment as a young boy both experiences and embraces (or not as the case might be) the world around about him as he shadows a learned druid in preparation for the ultimate test ...
Is Owayne ready to engage The Learn?

As with all historical novels the author combines what is actually known of that with a certain amount of guesswork, the fact that he then weaves some folklore and legend into the story; that it isn't a dramatic tale of war and high drama but rather a quiet, contemplative read of conflicted emotions, love and loyalty, whilst not to everyone's taste, only adding to its appeal as far as I'm concerned.

ABOUT THE AUTHOR ... Born in London, Tony is one of five children of mixed Scottish, English and Welsh parentage, of people who had hard lives. 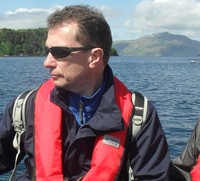 His main hobby other than reading fiction, has been mountain biking for over twenty years: off road on trails over woods, hills and mountains. Walking is an obsession in any terrain, particularly the beaches, mountains and hills of North Wales, hence the setting for my debut novel ... read more

Posted by Felicity Grace Terry at 15:53

Felicity,
Thank you for sharing some thoughts on The Learn. I'm glad that you enjoyed reading this quiet, contemplative book. Lovely review!

As you describe it, the world that the author builds in this book sounds so interesting. I might like the prose style to. I guess that books about ancient Celtic societies are popular these days.

I might have to take a closer look at this one. It sounds quite interesting, though I have to be in just the right frame of mind for flowery prose (or what I sometimes call "beautiful" writing).

Felicity,
What you said about Owayne's spiritual
journey, and how the author builds this
ancient Celtic world, as well as this
being a quiet and contemplative book,
all of this sounded interesting. And I
will definitely keep it in mind.
Thank you for an excellent review.
Raven

Thanks for sharing your thoughts on it. Sounds interesting.