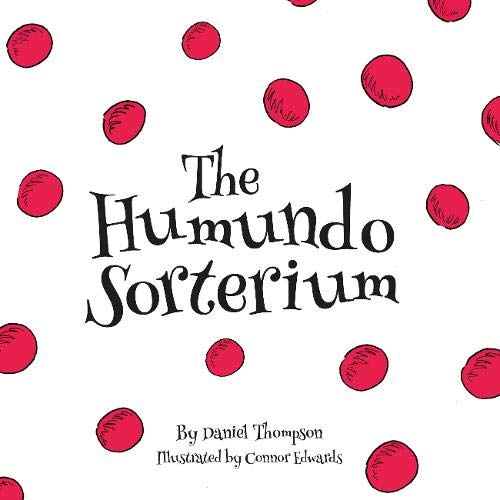 THE HUMUNDO SORTERIUM by DANIEL THOMPSON (With illustrations by CONNOR EDWARDS).


The Humundo Sorterium will be the second book brought to you by author Daniel Thompson and illustrator Connor Edwards. Following on from the success of The Christmas Tale of Elaine Gale this is another 5000(ish) word story written entirely in rhyme about a young boy's adventure to the 'Humundo Sorterium' Baby Making Factory.
- Book Description; Amazon.Co.UK

Did you ever stop to wonder,
How you came to be that shape?
Are you moulded out of plasticine,
Or held with sellotape?
- Verse One; Page 4

They formed a mighty runway,
All aglow with fireflies.
Then Handsome Henry took a run,
And leaped into the skies.
- Memorable Moment, Page Un-numbered

MY THOUGHTS ... What Dr Seuss was to previous generations so the dynamic duo of Daniel Thompson and Connor Edwards ought to be to this (and future) generation(s) such is the magic of their books of which this is the second.

Written in verse The Humundo Sorterium is the story of Buddy whose grandpa tells of a factory originally designed to help the storks (I know, who'd have thought it, I always felt certain that babies were found under gooseberry bushes) ... that is until ...

Ah! You'll have to read it and see. You'll thank me when you do.

Like their previous book, The Christmas Tale Of Elaine Gale (as predicted it has indeed become something of a Christmas  tradition here in the Terry household), The Humundo Sorterium captured my imagination from the get-go with its deliciously silly plot, quirky fictitious words, memorable characters and bold illustrations.

Its not just a fun read though, its also an important one in that it embraces individuality and the message that we each and every one of us are special human beings who bring something special to the world we inhabit.

Posted by Felicity Grace Terry at 14:19

The Humundo Sorterium sounds cute and I enjoy silly books like that with made up words. It reminds me of Alice in Wonderland.

Under gooseberry bushes? I alway thought if not brought by the stork, they were found in cabbage patches! 😆 (hence, Cabbage Patch Kids!)

Glad you enjoyed this one. :)

I do love a book in verse and this sounds delightful, Felicity! I will have to give this one a try.

Felicity,
It sounds like a truly funny,
creative and quirky book. Not to
speak of what you said what the
book conveys about individuality.
Raven

This sounds wonderful. Will be looking forward to it making its way to Canada.

Felicity,
I'm glad that this book captured your imagination from the start. You seem to be reading more books written in verse these days.
Happy reading to you in the week ahead!