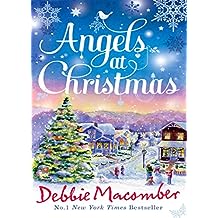 ANGELS AT CHRISTMAS by DEBBIE MACOMBER.

If you had one wish this Christmas…

Anne Fletcher sends a heartfelt plea in the hope that someone is looking down on her this Christmas. One wish – for her son to be happy. She doesn’t expect to have her prayer answered by three mischievous angels! They’re about to do a little matchmaking on Anne’s behalf and make her Christmas wish come true.

The angels are on hand again for lovely Beth Fischer who, since her divorce, is looking for romance once more. At eighty-six, Harry has prayed for peace of mind and little Carter Jackson has just one Christmas wish. Angels Shirley, Goodness and Mercy will make miracles happen this Christmas…
- Back Cover Blurb

Anne Fletcher  pulled the last box of Christmas decorations from the closet in the spare bedroom.
- First Sentence (Those Christmas Angels); Chapter One

The sights and sounds of Christmas were all around him.
- First Sentence (Where Angels Go); Chapter One

SOURCE ... Curious about this author for a while now but, despite them coming highly recommended, not books I particularly wanted to buy. I was therefore delighted to find this in a charity shop.

READ FOR A CHALLENGE? ... Yes.
MY THOUGHTS ... Comprising two novellas. Both of a nice length, the characters allowed to develop.

Taken individually I would have rated the first story, Those Christmas Angels as an OK read but (despite the fact it was itself three short stories within one) by far the better of the two stories, rather surprisingly, I actually found myself really enjoying the second story, Where Angels Go.

Stories in which the characters offered up their prayers whether they be those of a mother wanting her son to let go of the past and find love again or a young boy who so desperately wants a dog for Christmas (something I could strongly relate to) or ... sob; be warned you may want to have a tissue (or two) to hand ... an elderly man who, knowing he is soon to die, worries about leaving his beloved wife behind.

Though with what I felt was a strong Christian message at the heart of both stories I didn't feel that this was a message 'forced upon me' so much as it was just one aspect of the story.

Fluffy, nauseatingly sentimental, predictable in that you just knew everyone was going to get their happy-ever-afters, cheesy I'll grant you but hey-ho it wouldn't be Christmas without at least one such read.

Other books read for the challenge ...

Posted by Felicity Grace Terry at 14:53

I'm glad you ended up enjoying this. While I know of her and have read her contributions in Christian publications, I've not read any of her novels and didn't know how she would come across in one.

You're right... there's absolutely nothing wrong with cheesy, sentimental, and predictable at times. Sometimes it's just what we need.

I tried her new release last year and it was my first encounter. It was a riff on You've Got Mail. It was fun. I'll have to put this one on the possibility for future Christmas reads.

Sounds like a typical Macomber book :) I enjoy them occasionally because I know what to expect.

Of course I have come across Debbie Macomber's books plenty of times on fellow bloggers' pages.

However, when I have checked any of them out, I have always felt that the slightly cheesey story lines and rather simpering narrative, would drive me a bit insane.

Don't get me wrong, there is nothing bad about knowing that a story will have a happy ending, but they probably wouldn't be my books of choice if something more meaty was on offer!

I have to say that Debbie's books don't hang around too long on the book shelves of the charity shop, so I always make a point of trying to get them out as soon as they are processed - and for £1 they are definitely a bargain!

Thanks for sharing and enjoy your weekend :)

The first time I've ever come across one of her books in a charity shop. I've often wondered if that was because ...
A As Yvonne said they were snapped up straight away and I merely hadn't been in the right place at the right time
B. The author just wasn't to the average British readers taste so few books were purchased
C. People were buying them but the books were soooo good that having purchased and read them people just didn't want to part with them

Tracy,
Knowing how you feel about short
stories, I am glad that you really
enjoyed the second story. As for my
part, I am still uncertain about this
book.
Raven

thank you for well written introduction.
have a great day

I loved these holiday reads, in the last few years her Christmas stories have become more romance and less message. Like you said the message wasn't forced, but present.

I've read some McComber books and find them all predictable and HEA, but, like you said, tis the season and I do enjoy them.
sherry @ fundinmental

Greetings Tracy. I haven't read any of her books as of yet, I've made a mental note to try one out. Merry Christmas to you my blogging Friend. All the best for the festive season. Blessings. Love love, Andrew.

I really need to start reading some of my Christmas-themed books. I'm glad you felt the two novellas were long enough to really tell the stories; you don't always get that.

Sounds like the season for this one. Glad you enjoyed it and found it at a charity shop. :)
~Jess

Glad you enjoyed it, sometimes these cheesey ones are good reads anyway. I read one by this author as well for the holiday and it was ok, I found the conflict a little bit silly but it did have a HEA.