THE VERY THOUGHT OF YOU. 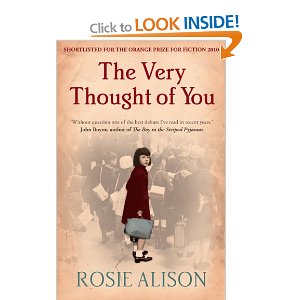 THE VERY THOUGHT OF YOU by ROSIE ALISON.

England, 31st August 1939: the world is on the brink of war. As  Hitler prepares to invade Poland, thousands of children are evacuated from London to escape the impending Blitz. Torn from her mother, eight-year-old Anna Sands is relocated with other children to a large Yorkshire estate which has been opened up to evacuees by Thomas and Elizabeth Ashton, an enigmatic childless couple. Soon Anna gets drawn into their unravelling relationship, seeing things that are not meant for her eyes - and finding herself part-witness and part accomplice to a love affair, with unforeseen consequences.
..... Outer back cover.

FIRST SENTENCE (Chapter 1): There was a hint of afternoon sunshine as Anna Sands and her mother Roberta stepped off their bus into Kensington High Street.

MEMORABLE MOMENT (Page 283): Like a ghost released from the pages of a book. A message for him, from more than twenty years ago.
KEEP IT OR NOT?: To be passed on to various family and friends, I will not be keeping this novel.

Before you read any further I feel I have to warn you that try as I might I found it impossible to write this review without the use of some (albeit small) spoilers.


A debut novel, The Very Thought Of You was longlisted for several prizes including the RNA Romantic Novel of the year 2010.

Now I'm not a huge fan of romantic novels so I wasn't at all influenced by the list of prize that this novel had been longlisted for. No, it was more the war setting, its depictions of children evacuated from all they knew, that appealed to me. And in this I was disappointed as the story of Anna (and the other 85 children evacuated with her) came a very poor second to the several 'romantic' plots that were featured.

I say romantic but to me there was nothing romantic whatsoever about this novel. Call me judgemental if you will BUT in my eyes the fact that every one of the 'love' elements involved adultery does not a good read make.

Adultery aside, apart from one event, I found The Very Thought Of You predictable, the characters, without exception, unremarkable at best and totally unlikeable at worst - the very thought of the adults involving a child in their illicit goings on quite simply made my blood boil - and yet, despite all this, I have to admit that I was touched by the not altogether unexpected ending. All in all hardly a good advertisement for romantic fiction, I can't say this in any way endeared me to the genre.

Purchased from The Book People magazine, this was the 66th book read in my 100+ Reading Challenge.
Posted by Felicity Grace Terry at 13:04

Usually when a reviewer warns of possible spoilers I skip the review. This time, however, I'm glad I read your review. I think I'd feel the same as you did about the book. Thank you!

A very compelling review. Loved the setting myself, the war background...
Have a fabulous Sunday:)

"...and yet, despite all this, I have to admit that I was touched by the not altogether unexpected ending".

That tells unexpected endings can be both ways , endear and be disliked.

The scene to begin with the war clouds moving in may have been an adequate setting for a romantic theme. But perhaps the writer lost the way and missed the plot!

good one as usual friend:)

I don't mind romance as a side story, but I rarely pick up true romance novels. From what you describe here, I think I would probably agree with you on all points if I were to read it. (which I don't think I will be doing) Thank you for the honest review.

I never for a moment thought of this as a romance. I read it when it was shortlisted for the Orange prize in 2010.
http://www.heatherpearson.com/2010/06/very-thought-of-you-by-rosie-alison.html

Just to say I have this on my shelf and it is very near the top of my list to read.

Oh wow... I didn't think you'd read it to the end. It had to be a good ending to be touched. I don't think this one is for me. I can stand predictable to a point but not the abuse of a child. Thanks for the honest review.

Your reviews really do rock! Always very informative and you have a knack for telling the very things that I want to know when I'm considering a book. Thanks!

Thank you for the review here. I've not heard of the book until now. But did enjoy your review of it. :) Thank you!

Hmmmm...The Very Thought Of You actually sounds like something I'd enjoy! :)
Sorry your didnt care too much for it, thanks for the honest review.
I do want to read it now.

"Romance" is not the first word that leapt to mind when I saw the cover or read the description.