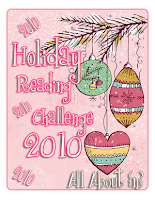 Book 3 of my holiday reading challenge. Not too late to join in, click HERE for the details and HERE to post any book reviews.
A CHRISTMAS CAROL by CHARLES DICKENS .
As Scrooge and the Spirit went along the streets, the brightness of the roaring fires in the kitchens, parlours, and all sorts of rooms, was wonderful. Here the flickering of the blaze showed preparations for a cozy dinner, with hot plates baking through and through before the fire, and deep red curtains. There, all the children of the house were running out into the snow to meet their married sisters, brothers, cousins, uncles, aunts, and to be the first to greet them.


A Christmas Carol, the timeless classic by Charles Dickens, is an essential part of traditional celebration of Christmas. In this, his most famous eulogy to the Festive season, Dickens vividly defined the message of goodwill towards to all mankind in his story of Ebenezer Scrooge. This 'squeezing, wrenching, grasping, scraping, clutching old sinner' who considered Christmas to be 'humbug' learns, through a series of ghostly visitations, the true value of charity, good humour and love for his fellow man. the spirits of Christmas Past, Christmas Present and Christmas Yet to Come, each with a terrifying message, point the way towards the old miser's salvation.
..... From the front inner cover.

FIRST SENTENCE: Marley was dead: to begin with.


MEMORABLE MOMENT; "I wear the chain I forged in life," replied the ghost."I made it link by link, and yard by yard; I girded it on my own free will, and of my own free will I wore it." 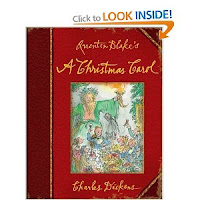 Not written with children in mind, I was surprised that the librarian found this copy of A Christmas Carol in  the children's section. Why the surprise you may ask when after all this novel has seen itself transformed into many a family movie and this book has been illustrated by QUENTIN BLAKE to appeal to children.

I must confess that this isn't one of the Dickens books I have read before. As a girl I read The Old Curiosity Shop and, neither liking nor understanding it, never felt inspired to read any of his other books ........ until now.

So did I enjoy it? Umm ..... put it this way, It hasn't inspired me to reread The Old Curiosity Shop OR any of his other books, no, not even Oliver Twist.

Whilst I found the writing to be quite poetical, to me it just didn't somehow or other flow and I found it really hard going in places. Add to this the fact that I didn't like the style of the illustrations either AND the fact that this particular edition as I mentioned before had been produced with children in mind and I could see why the book had only been lent out some eight times since being purchased by the library in November 1996 - not exactly a good recommendation is it?

That said, I know this to be one of the well loved classics, the number of times it has been made into a film and the fact that the words 'Scrooge' and 'Humbug' are almost universally recognised testifies to this. One of the rare occasions when I can honestly say I preferred the movie(s) to the novel though it has to be said that most of these have stuck, more or less, faithfully (apart from various widely differing interpretations of how the ghosts should look) to Dickens's work, I just think the film versions are more palatable to modern tastes though I know many of you will disagree.

Appealing to children? Personally I think not though they may be tempted to read it having perhaps heard of it from their parents/grandparents OR having seen one of the many movies. To me there is nothing to recommend this to a younger reader (apart from maybes the illustrations in this particular edition) who I think, on the whole, will find it difficult to understand some of the language and style of writing used especially after having seen some of the very visually clever and exciting films on offer.

II have the book, and it is on my Christmas reading list. I hope I like it, we'll see. I have seen the movie and the play, so I have to read it.

Good work you do on your blog here. Surely will check up with your blog before going book shopping.

I will be reading this book for my Holiday Reading Challenge too!

I have seen lots of movies from this book, but it was this year when I finally decided to read it.
I think almost all the classics have the same language problem...

Anyway, thanks for the review :)

Interesting. I have never read this one but I do enjoy the film versions. I like that memorable moment.
http://thebookworm07.blogspot.com/

(Diane) Bibliophile By the Sea said...

I am a little jealous you've read 3 already, and I've yet to read (1). Christmas Carol is a good one.

We go to see a local production of "The Christmas Carol" every year. It wouldn't be Christmas without it. I am starting to decorate this evening! love to you, as always! molly

You are "going to town" with this challenge, while I'm finding it hard to read as much as I'd like to precisely because of the holidays.

I don't know...I attempted to read Great Expectations once and couldn't get into it...I think Charles Dickens is one you either love or dislike but respect.

Like most people I feel completely familiar with the story and yet have never actually read it. Whether or not I might enjoy it there definitely would be interest value in becoming familiar with the original source of so many cultural references.

I don't have quite the aversion to Dickens that many folks have. Not exactly light reading, but I've enjoyed the ones I've read... especially "A Tale of Two Cities".

I liked this one, but I can certainly understand why most folks enjoy the movie/tv versions.

Last year I read/reviewed, The Man Who Invented Christmas which is a behind the scenes look at A Christmas Carol. This year I plan to read Dickens' story for the first time. Maybe I'll enjoy it more with the background knowledge I now have.

Thanks for stopping by my blog today and commenting.

Wow...it was your first read of this book? How exciting! I try to read a version of it every year...in fact I'm due for one about now. Perhaps another version of the story with or without illustrations would suit you better...after all the same old story isn't really the "same old" when it's been redone. Something changes in one form or another. Agreed on the audience though...it's actually pretty scary at times for little kids. Have you seen the new CG version with Jim Carey? Just came out on DVD...pretty good actually but they kept the scare factor too. Happy reading (or watching...)!

I remember reading it long ago...felt good to read this.

I guess I am one of those people who like Dicken's writing. I enjoyed every word of this book. I wonder if it makes a difference which edition you read? ?Do the publishers play with the language.

I did enjoy your comments.