PANTOMIMES AND BANK HOLIDAYS. (OH NO IT ISN'T. OH YES IT IS). 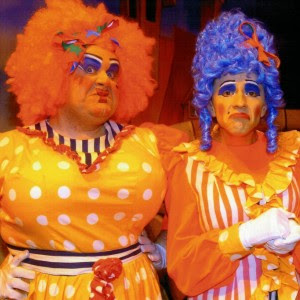 A few days ago on FaceBook, I was asked about Pantomime and what it was all about. Well....

Here in the UK Pantomime (Panto) is a musical show of sorts. Performed around about Christmas time with many of the stories based around Fairy Tales (this year, Newcastle's THEATRE ROYAL'S production is Cinderella), it is suitable for all the family though it is sometimes a little bawdy and there are plenty of seemingly innocent statements made to sound rather risque. Also known in other countries though it has not captured the hearts of the population nearly as much (and especially not in the USA) Panto is a very British art form.

Dating back to the Middle Ages, Panto is a mix of the Italian art of 'street theatre' and the British Music Hall and though it is sometimes difficult to understand the Panto story, the plot is, actually, very simple. Basically, amongst a cast of many you will always have:

The Principle Boy - A woman playing the part of a man with plenty thigh slapping. Generally this is the 'hero'. Peter in Peter Pan, the Prince in Cinderella, Dick in Dick Whittington, etc.

The Dame or Ugly Sisters - Always grossly exaggerated, a man/men playing the part of a woman/women. The mother in Jack And The Beanstalk, Widow Twanky in Aladdin, the Ugly Sisters in Cinderella, etc.

The Cow/Horse (or similar) - Two actors dressed as an animal, bent in half , one in front of another, one actor plays the front and the other, the rear end.

The 'Baddy' - Hook in Peter Pan, The Giant in Jack And The Beanstalk, etc.

And than, another element of every Panto is:

Audience Participation - Arguably the best part of Panto, I loved this as a child and still do (though not nearly as much as Husband dearest) as, after all, on how many other occasions are children positively encouraged to shout at the 'top of their lungs'? Audience Participation relies on the audience shouting set phrases at the actors. For example on seeing the Baddy appear behind any other cast member, the audience boos (unless you are Husband dearest, who cheers) and shouts "He's behind you." To which the actor being crept up on will reply "Oh no he isn't." To which the audience replies "Oh yes he is." This can and, generally does, go on for quite some time and will be repeated throughout the performance.

So that is Pantomime in a nutshell. Which brings me to another question.

Some time last week Cara at OOH ... BOOKS! asked me about our Bank Holidays, what they were and why we had them etc? A really good question and, to be honest, one I didn't know the answer to - I mean they were just there, happened on a Monday, one in April, another in May, a third in August and, the last, in December. That and the fact that you can almost certainly guarantee rain was my total knowledge on the subject, cue Husband dearest who informed me:

Prior to 1834 the Bank Of England observed 33 Saints Days and Christian Festivals as holidays but by 1834 were sufficiently powerful to start ignoring the Church and decided four days a year was more than enough time off for the 'plebs' and so it has been ever since though the current pattern of Bank Holidays was set in 1871 by The Bank Holiday Act which introduced the concept of holidays with pay.

I hope this has been of some use Cara.
Posted by Felicity Grace Terry at 09:45

INteresting - I also never knew what the bank holidays were all about. But then, I'm not British. :-)
Pantomime sounds like something I probably wouldn't like. eek!

Can't not like panto! Everyone should do panto at least once in their life.

"Oh no they shouldn't" - now look what you have started! x

Four bank holidays?! Ah to go back to the days of 33. I like days off. Thanks for the info.

Thanks for asking about my hnad. It is feeling better today! I did hurt my other hand last night. I know! I need to live in a bubble.

Interesting and informative post! Liked the info on the Pantomine musical show. Love it!

Oh how I miss the panto! the first time i heard the school was doing it, they said, "here's your daughter's lines." and i was confused; why would there be words if they're pantomiming? haha, we love a good panto!

Peety, Pantomime musical show sounds interesting.
Thanks for sharing.
Thank for your sweet comments on my blog, and for being a great blog pal.
love and hugs

Another interesting post to say the least! (Look at that picture! I'm guessing they were the men playing the ugly sisters?) I've never actually heard of this form of "theater" but as you said, the USA really never caught on to it. The closest I can relate it to here is probably a Cirque de Soliel (think I butchered the spelling there) performance, except they are more acrobatic. Sounds like fun though!

I saw the Cinderella panto while in the UK and laughed my head off. They're really very entertaining. Thanks for explaining it further.

Hmmm. Guess I'd have to see one to know if I like it or not.

Interesting about the Bank Holidays. So.... I guess nowadays you get all 4 Bank Holidays along with lots of others thrown in?

Back in the day when I was a theatre student (in Canada, no less, where we've gone the way of the States in this regard at least), we got to put on a short panto for our classmates. It was awesome. I'd love to see it over the pond sometime... how much fun!

Pantomimes are just brilliant! You have to see one to understand what they are all about! Christmas is not the same without the Panto Season!
We have the least Holidays in the whole of the world! Christmas, Easter, two in May, Petty you forgot about that, one at the beginning, and one at the end, and one in August! Besides that, that's all we get!

That's my fault for mentioning only the 4 which were approved in the act. The 'May day' bank holiday was not part of the act but maintained as a public holiday in Scotland. (Probably all those nasty pagan associations which good christian bankers would want nothing to do with.) The 1971 Banking act which replaced the 1871 act added the MayDay holiday and New Years Day to the tally of public holidays.