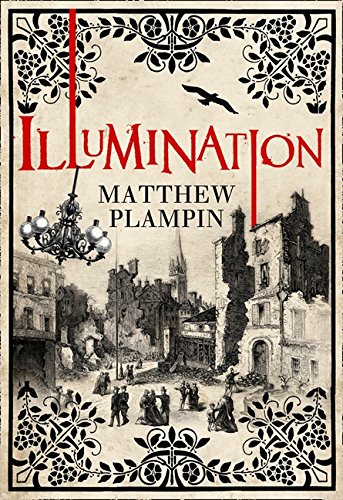 1870. All over Paris the lights are going out. The Prussians are encircling the city and Europe’s capital of decadent pleasure and luxury is becoming a prison, its citizens caught between defiance and despair. Desperate times lie ahead as the worst winter for decades sets in and starvation looms.

One man seems to shine like a beacon in the shadows. Jean-Jacques Allix promises to be the leader the people need, to save the city itself. Painter Hannah Pardy, his young English lover, believes in him utterly; taking up arms for his cause, she is drawn into the heart of the battle for Paris. But as the darkness and panic spreads it is harder and harder to see things as they really are, and Hannah struggles to separate love from self-interest and revolutionaries from traitors.

Faced with impossible decisions, Hannah must confront the devastating reality of her beloved Paris to establish what truly matters to her – and what she will do to protect it.
- Inner Front Cover Blurb

Hannah entered the drawing room and froze: what appeared to be a miniature kangaroo had climbed up onto a chair and was nibbling at a vase of lilies.
- First Sentence; Prologue; Venus Verticordia, London 1868

She lay down, resting her head on the ice ground. Slept crept through her, warming her, sinking her into the earth.
A tapered toecap poked against her hip, testing for life; a pair of patent bottines, scuffed and crusted with mud, completed a sauntering circuit of her body.
- Memorable Moment; Page 289

MY THOUGHTS ... A laborious plot, for the most part lacking in historical accuracy.

The dialogue, stilted and oddly unemotional to say nothing of, at times, confusing. Given that the main female protagonist (Hannah) always referred to what turned out to be her mother not as mother/mum etc the relationship wasn't clear; were they somehow related or merely friends? It took me a while to work it out.

As for the characters, cardboard cliches, the females one of two types; like the afore mentioned Hannah, as the author was constantly at pains to point out, a 'nice' girl or, like Laure a 'tart', something I think the author wasn't just happy to point out at every opportunity but I actually felt was judgemental about. Then there were the male characters who without exception I found insubstantial.

Largely unmemorable. Alas I fear that the only thing that will stick in my mind are the awful passages involving the zoo animals. Its true, no scenes involving harm to animals sits well with me but these scenes??? OK so historically accurate and therefore something we'd arguably expect to find within the pages of this novel but why the need to make the depictions so graphic when graphic depictions are hardly a trademark of the book as a whole?

SUMMED UP IN A SENTENCE ... Another book cover that seduced me (I really must remember to take my reading glasses with me when I go out) ... if only the book itself had done the same.

Posted by Felicity Grace Terry at 16:46

Oh, dear. Your first line about the plot and lack of accuracy made my decision right there. Reading on, you confirmed that decision for me. I'll agree, though... it's a good cover.

Sounds really bad. Passages that involve animal suffering disturb me too. The cover does make the book look good

Felicity,
I am sorry that this book was such
a disappointment to you. And neither
do I appreciate books which involve
the suffering of animals.
But thank you for your honest and
excellent review.
Raven

That's too bad this disappointed. And the cover and blurb make it sound so good. I don't like to read about animal cruelty either.
Hopefully your next read is better.

I'm sorry that this book was disappointing. Thank you for your honest review.