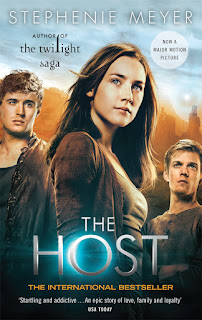 THE HOST by STEPHENIE MEYER.

Melanie Stryder refuses to fade away.

Our world has been invaded by a species that takes over the minds of human hosts while leaving their bodies intact but Wanderer, the invading 'soul' who occupies Melanie's body,  finds its former tenant refusing to relinquish possession of her mind.

As Melanie fills Wanderer's thoughts with visions of  Jared, a human who has avoided invasion and lives in hiding, Wanderer begins to yearn for a man she's never met. Soon Wanderer and Melanie - reluctant allies -   set off to search for the man they both love.
- Back Cover Blurb

I turned to the cupboards next, kneeling on the nasty carpet to peek carefully inside. I leaned away as I opened the door, afraid I might be disturbing one of the venomous desert animals in its lair.

The first was empty, backless, so that I could see the wooden slats of the outside wall. The next had no door, but there was a stack of antique newspapers inside, covered with dust. I pulled one out, curious, shaking the dirt to the dirtier floor, and read the date.
- Memorable Moment; Page 107

MY THOUGHTS ... Having read the author's Twilight books I was keen to read something else of her's; something that didn't involve sparkly vampires or werewolves and, most of all, didn't involve any romantic cliches.

The minute the 'beautiful' Edward (sorry did I say Edward? I, of course meant Jared) ... The minute the beautiful JARED was mentioned I thought here we go again; a character so like Edward that I could be forgiven for confusing the two.

Not that the similarities between this and the Twilight books ended here. The male/female relationships almost without exception ranging from the 'mildly unhealthy' to the downright abusive, the male characters emotionally immature alpha males; the two suitors (would it surprise you to learn there was something of a love triangle going on?) all but beating their chests, literally fighting over who got to carry the damsel (an idealised version of femininity, but of course) off to his cave.

A novel that it is said the author herself claims is for those who don't like sci-fi. For myself (not a huge fan of sci-fi it has to be said, I leave that to my other half, not that I can see him reading this any more than I can see him reading Twilight) I thought this had the makings of an interesting novel. Its just a shame that it was poorly executed and, well, rather, what? Lame? Lacking in imagination? Honestly the names of some of the aliens, planets and medicines; you couldn't make them up ... Oh! Except the author could and did.

Then there's the fact that widely accepted as a read for 'adults' (as opposed to the Twilight franchise which was unashamedly marketed as being for Young Adults). I'm sorry but I just don't get it. WHY? What sets The Host apart as being one for the grown-ups?

An edition totalling some 619 minute print size pages (AGGGHHH!) essentially all of them a bit 'meh!'; the characters all too recognisable (at least to those who are familiar with the Twilight series), the world building ... Hmm! Lacking in imagination.

Posted by Felicity Grace Terry at 17:33

I never read the Twilight series. Too bad that this lacked originality. The male characters as you describe them sound terrible.

Felicity,
I am not familiar with the Twilight
Series. But what you said in regard
to The Host, about female/male
relationships, the stereotypical
alpha males or the general lack of
imagination and originality of this
book. I would not want to read it.
But as always I appreciated your
honesty and criticism.
Raven

I read this one before I read the Twilight books and I remember enjoying it quite a bit. My other half and I both enjoy sci-fi and he also read this, along with the Twilight books. (and we enjoyed all the films) To each their own. I'm sorry it didn't work for you.

i read this and loved it. i had not read the twilight series when i read this, but i have now. i so love the twilight movies, but the books ...i might not have completed the series if i hadn't seen the movies first. i don't mind characters that behave badly...isn't that like real life? lol thanks for the honest review!
sherry @ fundinmental

Felicity, it sounds like this wasn't a hit with you. I hope your next book is more to your liking. I haven't read any of the Twilight books but have seen movie versions, which I found entertaining. Thanks for sharing your true thoughts.