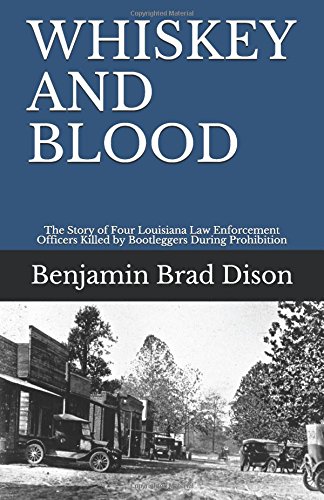 A naked killer flees from police, a shootout on Main Street, a fight between police and bootleggers on the running board of a fast-moving Ford Model T, and courtroom drama which went all the way to the United States Supreme Court. The adoption of the Eighteenth Amendment to the United States Constitution spawned an era of lawlessness. Bootleggers and law enforcement officers fought what seemed like a never ending battle, and many people died as a result. In the middle of the prohibition era, four Louisiana officers were killed in the line of duty while enforcing prohibition laws in a two week period. Whiskey and Blood is the shocking but true story of the events leading up to the deaths of officers Neill Yarborough, Sample Toms, Sam Duhon and W.E. Collins, and the aftermath which followed.
- Back Cover Blurb

In the last two decades of the nineteenth century, temperance groups grew strong and powerful, with national prohibition being their goal.
- First Sentence; Introduction

The dirt streets of Saline were now dark. The sun had been down for two hours and the new moon provided no light. The soft glow of coal oil lamps and gas lights lit the stores, but was too dim to provide much light on the streets.
- Memorable Moment; Page 17/18

SOURCE ... A gift from friend a fellow blogger, thanks Kelly of Kelly's Thoughts & Ramblings whose son-in-law is the author.

MY THOUGHTS ... A short (my only criticism being that at 74 pages it was too short) but highly insightful and interesting book that offers what for me was a rare glimpse into life as it was really lived in this small American town during this era of prohibition.

With sentences like that shared in my Memorable Moment above, a writer certainly capable of setting the scene, of drawing the reader in; part of me couldn't help but wish that this was actually a novel. But then perhaps facts would have got in the way and, if the astonishing amount of research is anything to go by, the author certainly likes facts.

Well written; thankfully neither too dry and academic a piece. Full of enough thrills to appeal to those more used to re-imagined accounts of actual events and yet factual enough that it should appeal to those wishing to read it on a purely sociological basis.

Posted by Felicity Grace Terry at 14:54

So glad you enjoyed this, Tracy. I'll be sure to share your review with my SIL. You might be interested to know that Bienville Parish (where Saline is located) is the place in which infamous bank robbers Bonnie & Clyde had their fatal shootout. My SIL is working on a book about that and also was hired as a stand-in for a Netflix film about it (The Highwaymen) which was filmed there recently.

Despite the length, this does sound like it was well done. Great find.

That was definitely a period of rough and tumble history. My husband's hometown was strongly involved in smuggling and bootlegging so this book interests me. Glad it was well developed even though it was short.

Ah yes it's true that with 74 pages, it is short

Great commentary Tracy. The Prohibition era and all that came with it is so interesting. It was a wild time. I would like to read about it so I think that I would like this.

This sounds fascinating, Tracy. Maybe a full-length novel is in the works for a future work. Excellent review!

Tracy,
This sounds like a very interesting
and compelling book. After Kelly
reviewed it at her blog, I added it
to my list. But I really appreciated
to read your opinion about the book
as well.
Raven

Greetings Tracy. Glad you enjoyed this one. Sounds like a good factual read. Sorry you didn't like it being so short. Blessings. Love love, Andrew.

Sounds interesting. I like a good factual read every now and then. :) I am intrigued. 74 pages sounds doable- and I like that you only wish it was longer. Promising!