Another review for which you might want to be sitting comfortably.  Today I'm bringing you ... 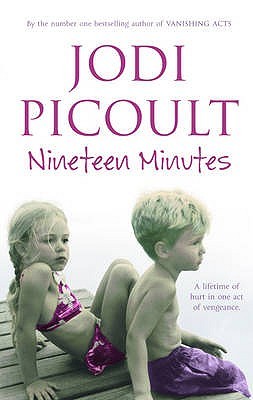 Sterling is a small, ordinary New Hampshire town where nothing ever happens - until a student enters the local high school with an arsenal of guns and starts shooting, changing the lives of everyone inside and out.

The daughter of the judge sitting on the case is the state's best witness - but with her boyfriend dead and her childhood friend charged with murder, she's struggling to remember what happened in front of her own eyes ...
... Inner Front Cover Blurb
(Contains what might be considered a spoiler, scroll over text to hi-light. TT)

By the time you read this, I hope to be dead.
... First Sentence, Part One

Monsters don't grow out of nowhere, a housewife didn't turn into a murderer unless someone turned her into one. The Dr Frankenstein, in her case, was a controlling husband. And in Peter's case, it was the whole of Sterling High School. Bullies kicked and teased and punched and pinched, all behaviours meant to force someone back where they belonged. It was at the hands of his tormentors that Peter learned how to fight back.
... Memorable Moment, Page 208
(Contains what might be considered a spoiler, scroll over text to hi-light. TT)


MY THOUGHTS ... For a long time now I've had a bit of a love/hate relationship with this author's books.

Not overly well written, cliched; formulaic; over lengthy descriptions ... I could go on. But, oh my goodness! On the whole, books that I have found to be page turners - Ms Picoult sure has a way of getting her readers hooked. However, though never say never, I think this particular book is where my reading of her books ends.

Why now? Why this particular book? I hear you ask.

It began with 'In nineteen minutes you can' - cue list of things - 'mow your front lawn; bake a batch of scones; colour your hair; order a pizza and get it delivered' ....

A small matter, one so inconsequential I'm almost embarrassed to mention it BUT order a pizza and get it delivered, in nineteen minutes? Not where we live you can't and we live in the suburbs of a city.

As I said, its the smallest, most trivial of things.

Of the larger things that annoy me about this book however, we have (in no particular order) ...

The use of weird similes. '... with a fake smile so wide it divided her entire head like an equator.'

The use of words like 'rightest'. What? Rightest? Since when?

Inclined to be cliched. I won't go into dealers because of the fear of spoilers BUT, suffice to say, every reason as to why a high-school student should one day go into school and shoot dead several of their fellow students is gone into.

I wouldn't mind so much if it weren't for the fact that, rather disappointingly, we get to hear the theories of just about everyone else and yet, narrated in part by the killer, we never get to hear what is going through their mind during the actual shooting.

There was all the toing and froing between the myriad of characters' stories ... lets see there was Peter and his mother, Josie and her mother; Patrick; Jordan - that's at least six characters - all with their own stories being simultaneously told ... to say nothing of all the jumping around between present events and those of months/years ago.

Why then did I read all 503 pages? Less than impressed with the writing, the characters were great, right?

Well, for one, once started I HAVE to see a book through to the bitter end ... even if to get to that ending, though it doesn't happen very often, I do, as with Nineteen Minutes, find myself skipping sections.

And two, whilst the characters weren't great (I certainly found myself unable to invest in any of them), convinced there was more to one of the character's story than at first seemed (a hunch that proved correct) I admit curiosity got the better of me.

Posted by Felicity Grace Terry at 15:27

I've yet to read anything by this author, though I do have two of her books on my wish list. This one isn't going to go on my list. Thanks for your honest review of it.

I have not read Picoult. Her premises always sound so interesting. However, I have heard a lot about her overuse of cliches and not so great writing. I would really want a book like this to get into the head of the killer.

Tracy,
Thank you for your honest review. I don't think I could read this, given all the awful recent shootings in American schools.

Tracy,
I am sorry that this book was
so disappointing but thank you
for your honest review.I think
I would only borrow it from the
library.
Raven

I have read a few of Picoult's books and enjoyed them. They do tend to follow a predictable pattern. This is one I liked, although it was my last by her I have read. None of her other books I have yet to read have appealed to me.