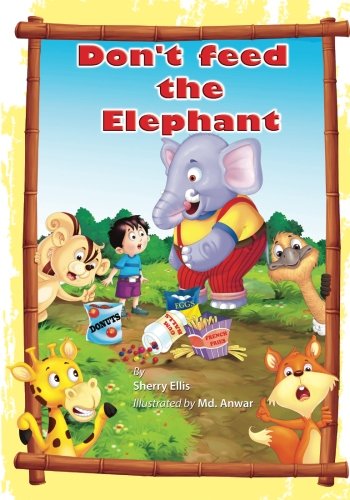 DON'T FEED THE ELEPHANT by SHERRY ELLIS (With Illustrations by MD. ANWAR).

People say that you're not supposed to play with your food. But the adventurous little elephant in Don't Feed The Elephant never got the message! Join him as he dances around with a cotton-candy wig, spins donuts on his tusks, and makes himself an ice-cream-cone hat!

Parents can laugh along as their little readers discover the story of this rambunctious elephant. the tale of this elephant and his love of food won't just delight you with its silly antics and hilarious situations. It was also teach your children about the letters of the alphabet. from animal crackers to zebra cakes, this elephant is keen to try foods starting with every letter of the alphabet.

It will get him into some trouble too. As the elephant deals with ornery zebras, sour pickles, and a sick tummy, kids will learn one more very important lesson: don't feed the elephant!
- Back Cover Blurb

If you happen to meet an elephant and he asks for a snack,tell him "NO!"
- First Sentence

Then he'll slurp up the lemonade, pucker up, and make lemonade rain!
- Memorable Moment, Page not numbered

SOURCE ... Received with thanks from the author.*

MY THOUGHTS ... Given that one of the objectives of this book is to teach the alphabet, because of the occasional differences in English/US spellings (Doughnut/Donut for example) this book is perhaps one for US readers.

Little ones will doubtlessly be captivated by not only the humorous verse, but the bold, bright illustrations which combine to make a fun read, as entertaining as it is educational. A great any time read, as to read it solely at bedtime will undoubtedly herald a later than usual bedtime due to cries of 'again! again!'.

* As a matter of transparency, the author, whilst not known to me personally, is a friend on Facebook. TT

Because of the occasional differences in UK/US spellings (Doughnut/Donut) and product names (Candy floss/Cotton candy) this book is more suitable for American children and I'd therefore like to offer it to either one of the American visitors to Pen and Paper or one of my American FaceBook friends.

Only one 'rule', it has to go to the home of a child/children who are beginning to learn their alphabet. Simply leave the word 'elephant' either here on Pen and  Paper and/or or my Facebook page (to comment on both will get you two entries). All names will be put into a hat, the winner drawn by Mr T on Wednesday (21st March) at 6.00pm GMT. The winner announced the following day. TT

Posted by Felicity Grace Terry at 17:16

Tracy,
This sounds like an adorable children's book. I don't have any little ones at home, but I am happy to add your giveaway to my blog's sidebar.

This sounds like a really cute book. I do have grandchildren that age, so put my entry in the hat!

Oh I can totally see little ones getting into this with the word play and brilliant colors. Thanks for sharing!

Tracy,
I have no children at home. But
this sounds like a lovely, funny,
creative and precious book. And I
loved your first sentence and
memorable moment.
Raven

I have known Sherry Ellis for a long time and recognize her as one of the top authors of books for young readers. Based on your review I can tell that Don't Feed The Elephant will be another success for Sherry. It is interesting how some of the words used stateside to identify food items are different from the words used in the UK, making the book more suitable for American children.

Thank you for posting, Tracy!

This looks like an adorable book and probably one I could use since I am spelling challenged. I do not have any little ones at home, but I do have kindergartners and 1st graders in my library at school. Not sure if that counts... if so, elephant. :)

I'm a big fan of Sherry Ellis' books even though I'm not a child. But I am a child-at-heart.

Your review will certainly help others decide to buy this delightful book.

I'm also a Canadian so I won't be able to participate in the draw. And I do own my very own copy of "Don't Feed the Elephant". It's a charming and colorful "colourful" book.

oh that's something interesting there!

I don't have any little ones myself but this is so cute and I hope you get lots of entrants! - Tasha

Your entry did indeed count Stephanie, I added it to the entries received here and on FB though sadly you did not win a copy this time. the book went to Kelly.

Nice to see some friends of Sherry's here at Pen and Paper. A warm welcome to Shady Del Knight and (another Tracy) Tracy Campbell.

Congratulations, Kelly!
And thank you for the warm welcome, Tracy.