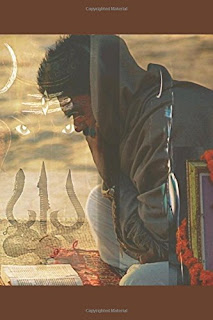 The Place: A retirement home

The Target: A callous Brahmin doctor

The executor: A vengeful son

The moderator: An angry mother

The Influencers: A senile elderly woman resident, an enigmatic founder, a dim secretary, a sinister boss

The mantra: The samudra manthan
- Back Cover blurb
(For more indepth details please click on the book title)

In his earthly abode, an elderly Brahmin was doing what he did every morning ever since he had attained puberty.
- First Sentence, Prologue: Very early morning at the Govindarajan Memorial Residency (GMR)

Ravi beseeching the doctor to change his mind. Ravi appealing to the doctor's humanitarian side. Ravi reminding him of his professional duty towards a patient in need. Then came the humiliating scene of Ravi trying to touch his feet and the doctor immediately stepping back and asking him not to do so. It ended with Ravi quietly telling Dr Chari, 'You have denied my father succour. In a way, you are signing my dad's death sentence. Pray to God, for your own sake, that in this life you never see me again.'
-Memorable Moment, Page 59

MY THOUGHTS ... A novel incredibly rich in human emotions.

The characters, whether primary or secondary, well thought through. Like an onion just as one 'layer' was peeled back so another was revealed.

The language at once simple and yet powerful. The slow pace, equating the slow unravelling of a man beset by feelings of guilt and revenge, something to be relished rather than annoyed by.

The use of Hindu scripture/mythology (made apparent to the reader via the inner voices in the various characters heads) adding a unique and authentic flavour to an impressive novel that, whilst painful at times, I ultimately found rewarding. My only regret being that, unfamiliar as I am with these scriptures, I don't think I came away fully appreciating just how they informed the thoughts/actions of the characters.

* Also published as Brahmahatya: Sanskrit for 'the act of killing a Brahmin'.

Posted by Felicity Grace Terry at 17:22

Email ThisBlogThis!Share to TwitterShare to FacebookShare to Pinterest
Labels: A Novel (re)View, Received for review

I'll admit to being intrigued by this, but I'm not sure I'd really like the style in which it's written.... if the memorable moment is anything to go by. Your review sure makes it sound good, though.

Sounds like a powerful read! I haven't heard of it before. Thanks for sharing. :)
~Jess

Tracy,
This sounds like a very refreshing and
powerful book. And although I am keeping
in mind what you said for instance about
Hindu mythology, I will add it to my list.
And thank you for your excellent review.
Raven

Greetings Tracy. Sounds like a good read. I like reading about the five most popular faiths, it intrigues me, as there are so many followers of each. Blessings to you.

Thanks for sharing. I'm glad that the slower pace was more enjoyable and far less annoying. You just never know sometimes!

This sounds wonderful. I've been drawn to slower paced books recently and I think I know of several of my friends who would like this one as well.

I think I would enjoy this one as well. I also love having a different mythos than we usually get. Brilly review!

I am definitely intrigued by this one! I love it when books weave scripture and other religions into the story as well - it's always a chance to learn new things and delve into a different culture and mythos, so will have to keep an eye out for this one. Loved your review, as always Tracy, and I hope you've been well. - Tasha