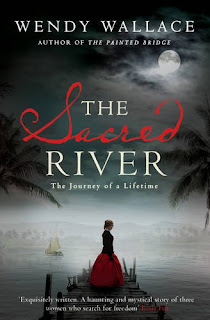 THE SACRED RIVER by WENDY WALLACE.

Harriet Heron's life is almost over before it has even begun. At just twenty-three years of age, she is an invalid, over-protected and reclusive. Before it is too late, she must escape the fog of Victorian London for a place where she can breathe.

With her devoted mother, Louisa, her god-fearing aunt, Yael, and a book of her own spells inspired by the Egyptian Book of the Dead, Harriet travels to a land where the air is tinged with rose and gold and for the first time begins to experience what it is to live. But a chance meeting on the voyage to Alexandria results in a dangerous friendship as Louisa's long-buried past returns, in the form of someone determined to destroy her by preying upon her daughter.

In this land where the air is tinged with rose and gold, all three women journey towards destinies that take them further than they could have ever imagined.
- Back Cover Blurb

'Oh Lord, what is that?
- First Sentence, Chapter One

All boys, aged seven, eight, nine - it was hard to tell; so many had hardened, wizened faces on slight and childish bodies. Every last one of them appeared half-starved.
- Memorable Moment

MY THOUGHTS ... A lovely moody, Gothic cover that to me shouted of a hauntingly mystical novel. A synopsis that spoke of  a reclusive invalid, Victorian London fogs, spells inspired by the Book of The Dead, a dangerous friendship, a voyage to Alexandria - combine all these things and this should have been the perfect read for me and yet ....

An invalid, a severe asthmatic, a prisoner if you will in her own body. Main character Harriet's life 'over almost over before its begun'. As a fellow asthmatic I found myself wheezing alongside her as I longed not for a nebuliser that sees modern drugs administered straight into the lungs so much as the burning nitre paper that, having filled the room with smoke, sees her, an hour after her worst attack ever, wanting tea and toast. Hmm!

A story of self discovery, each of the three women (Harriet, her mother; Louisa and aunt; Yael) in their own way running from something but to what? Whilst each women brought something different to the story not only did I fail to find in any of them the really strong, feisty female character that I so enjoy (and was hoping for), I found myself unable to connect with any of them beyond the most superficial of levels. Their growth (to say nothing of the plot itself) largely predictable, I continuously found myself a step or two ahead of the actual developments .... Except in the case of Harriet and a young male artist whose relationship, rather frustratingly never adequately explained, I couldn't fathom.

Which brings me to the men.

Given that this is Victorian times, granted the so-called metrosexual male would look out of place, however ....

The 'romantic' lead aside, from the man who rather than blame his father who seduces the young and powerless blames them for seducing him to the man who berates his wife for her becoming pregnant pre their wedding to the missionary for whom a bribe is the only way to secure help, it seems  chivalrous was non-existent.

And yet for all that, a book I'd rate as an OK read. I can't quite put my finger on what it was - perhaps the spiritualism aspect that cropped up from time to time (how I wished there had been more of it), perhaps my desire to find if, away from the smog filled London, Harriet would be 'cured' - there was just something compelling about The Sacred River that kept me turning the pages.

Posted by Felicity Grace Terry at 22:59

I'll admit, I was surprised that you ended up saying it was an okay read, given the first part of your review.

Having recently read a good historical fiction (Anima and the Goat) with a strong female protagonist (which also stopped off in Alexandria for part of the story), I don't think I'll read this one. I'm afraid it might disappoint.

Tracy,
Keeping in mind all of your objections
against this book. I am very uncertain
if I would appreciate it.
Raven

Tracy, thanks for sharing your thoughts about this new to me book. I'm glad you found something compelling about it.

The premise of this book sounds so good. It seems that many writers are able to come up withy great concepts and them be unable to execute them to their full potential.

The male character that you describe who blames victims sounds sadly realistic.

Hi Tracy, I have a feeling I would enjoy this, but perhaps I will only buy it if I happened on it in a charity shop. I have so many books just waiting to be read – I really don’t need to buy any more for the next ten years. :)

Greetings Tracy. Thanks for the review. I'm currently writing two novels, so don't do much reading at the moment. Blessings to you.

Despite your niggles this sounds like you found a good book. Hope the next is even better!