JACK FORTUNE AND THE SEARCH FOR THE HIDDEN VALLEY. 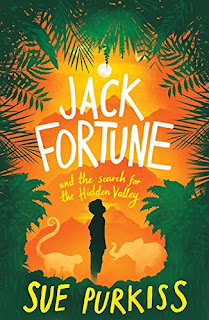 JACK FORTUNE AND THE SEARCH FOR THE HIDDEN VALLEY by SUE PURKISS.

An orphan child full of mischief, Jack lives with his crotchety widow aunt in eighteenth-century England. His naughtiness knows no limits, and when one day he goes a step too far, Aunt Constance decides that she s had enough: from now on, his bachelor uncle can take care of him. Uncle Edmund is in no way prepared for a boy with boundless energy and an impish streak and anyway, he s off to the Himalayas to search for rare plants! But Aunt Constance is absolutely determined, and Jack s uncle has no choice he will have to take the boy with him.

What follows is a terrific adventure that will see Jack and his uncle the most unlikely of all expedition teams sail to India, cross the jungle and reach their mountainous destination, before returning to London to present their findings to the Royal Society. Along the way, Jack will finally come to terms with the great loss that has blighted his childhood years and discover, quite unexpectedly, that he and his late father have much in common.
- Back Cover Blurb

Jack Fortune was in a filthy temper.
- First Sentence, Chapter One: The Final Straw

The heavy canvas bags had been torn apart, and their contents were scattered. Rice, vegetables and meal had been ground into the earth. Torn plant papers and petals drifted about the clearing, and carefully labelled boxes which contained precious seed had been smashed. Notebooks lay open, their pages muddy and torn.
- Memorable Moment, Page 122/3

SOURCE ... Received for review with thanks to Alma Books.

READ FOR ... No applicable

MY THOUGHTS ... What my grandad would describe as a rollicking good read for the bairns.

Marketed at those aged nine to eleven years, Jack Fortune And The Search For The Hidden Valley has a wonderful Boys Own adventure story vibe about it. Reading it I felt wonderfully nostalgic for the stories of my childhood.

Inspired by Sir Roger Banks and the 'plant hunters' (details of which are to be found in a short but interesting Afterword), adventurers who as the title suggests journeyed the world in search of rare plants.

A delightfully 'old fashioned' story with some amazingly memorable characters, many of whom are quintessentially British like Colonel Kidd whose Indian home 'looked exactly like an English one.' Why? You might well ask (Jack certainly did). Well, as Uncle Edmund explains "We're English. Of course the Colonel would want to live as he would at home."

Asked by many of my friends if I can suggest any books for their sons of this age. Jack Fortune is certainly one I wouldn't hesitate to recommend. In many ways a 'boy's boy', we first get to meet him digging up a dead rat he and his best friend, Will Puddy, had buried days previously, his Aunt Constance despairs of him, his Uncle Edmund, off on another journey into unknown territory, reluctantly takes him along. What is really nice about the story is how his character develops as he identifies skills he didn't know he had, growing as he comes to know of the customs of people very different to himself, learning about their beliefs and customs, oh! and the mythological metoh- kangmi, the guardian of a hidden valley, something the author impressively and seamlessly adds into the mix.

With a sub-title of 'And The Search For The Hidden Valley', fingers crossed there will be another adventure, perhaps another culture (and who knows, maybe even another mythological creature) to learn about, in a second outing for Jack and his Uncle.

Posted by Felicity Grace Terry at 14:12

The cover jumps off the page and it does sound like a fun read, no matter what the target age.
sherry @ fundinmental

I'm glad this turned out to as good as the book description sounded! Hoping, too, that it will turn into a series for you.

Oh, I have to agree! That cover grabs the eye, but the story sounds like so much fun! Thanks for the share!

Tracy, this does sound like it would be a lot of fun to read! Terrific review, once again!

I have one special little bookworm customer who regularly visits the charity shop where I work and will quite happily sit in the children's book corner whilst his family looks around. He is now at an age where he would love this kind of story, so I shall be keeping my eyes peeled for a copy.

I am assuming that in your excellent teaser lines, Jack's camp in the jungle has been ransacked by animals - or maybe hostile humans?

A great review, you really sold this one to me and you obviously enjoyed it :)

Great review Tracy. This does sound like a lot of fun. I also loved this kind of adventure when young. Rare plans are also very cool :)

Thanks for sharing your views on this book. Intriguing premise.

Tracy,
From your enthusiastic and excellent
review this sounds like a very engrossing
and delightful story, and Jack a memorable
character.
Raven

Love your thoughts on this one and will keep it in mind when my grandchildren are at this reading level.

This sounds like an excellent book that boy readers would enjoy. It's nice to have books like this for them.

Thanks for sharing, and I'm glad you enjoyed this one. It does seem like a good read for younger boys - and some girls too. ;)

Sounds like a good one if you say its a "rollicking good read for the bairns" :)
Happy weekend.