A member of two reading groups myself I was interested to read THIS ARTICLE on the MailOnline .......... 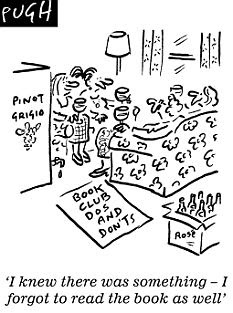 With no rules written down or otherwise, both of the groups I attend - hello The White Swan Readers (WSR), greetings The Oxford Centre Reading Group (OCRG) - seem to run pretty smoothly though I have to say that there are generally some moans and groans as soon as 19th century literature is mentioned - I seem to remember there were one or two moans and groans when it was suggested we read Dickens Bleak House.

But perhaps we are doing it all wrong and should take a leaf out of the book (no pun intended) of THE MIDDLE CLASS HANDBOOK website who offer the following advice to ........

'help members keep discussions on track and prevent the collapse of their club'.

The book club that drifts away from books towards discussions of Sean Bean is destined for failure.'

Posted by Felicity Grace Terry at 11:13

Having never been in one myself (shocking, right?), I'd only be speculating....but I'd probably say look for a shared interest in the titles chosen, or perhaps allow a different member each month to choose the book so everyone's taste is accounted for. ^_^

All my book club experiences have been dismal so my advice would be "avoid book clubs." Still, I keep hoping to some day find one that fits me.

Petty, I think these rules sound "sound". Why not serve tea and coffee instead of wine? I think the goal should be to keep the discussion moving, without being too superficial.

I've never been part of a book club. IT sounds like fun!

I've never been in a bookclub. I'm not sure I would like knowing I HAD to read a specific book. It's a step forward for me just committing to reading challenges in blogland!

Interesting that Middlemarch was the example given in this list. I have it on my shelf and had hoped to get to it either this year or next. As for Bleak House...I've not read it (though I do like Dickens), but my daughter had to read it for a college history course and loved it.

Too much alcohol and everyone will be the opinionated friend... although it might be entertaining. :D

Interesting rules. I belong to a book club and we don't have any rules. So I guess my rule would be to sit back and enjoy the books and discussions. What I like the best is being exposed to books that I might not ever pick up. We each take turns picking a book. For example, I read The Other Bolyen Girl a couple years ago- and ended up loving it- but I never would have picked it up based on the cover alone. :)

Those sound like good rules. I've never belonged to a book club, but I'll have to keep them in mind (some of them really amused me, especially the second to last since I just read a book with a BBC series adaptation).

I've been in an online book club, but I suppose that doesn't really count with these rules. HOWEVER, it is important to have people share various ideas of books to read and then vote. That's what we did online, so we were able to involve everyone, find the best books for us, and even read some new type of stuff along the way.

I find this quite funny, realistic and true. I can't imagine myself in a book-club, I tend to talk alot and over-analyze text like there is no tomorrow. But what caught my attention is the mention of Middlemarch, guess which lady is reading it right now? I have the awesome task of reading Middlemarch for my ethics class, and sometimes I do find it mildly bogging me down and don't quite enjoy taking it through an ethical perspective but ebing a sucker for classics and analyzing I don't mind it. Guess I would be that weird girl, with big glasses in the book club. :P
I enjoy your posts, hope you have a great day.

Haven't had any luck with book clubs, but keep hoping I'll find The One. Some day! :)

I've never been in a book club, but this sounds like good advice. Especially about the alcohol.