WHAT DO THE FOLLOWING HAVE IN COMMON?

Answer - they were all in the newspapers this week-end.
Enid Blyton once described herself as “a sightseer, a reporter, an interpreter”, the viewer of “a private cinema screen inside my head”. And this peculiarly guileless way of working, coupled with her remarkable speed – she wrote more than 600 children’s books, and claimed to be able to produce up to 10,000 words a day with her typewriter balanced precariously on her knee – gets to the heart of how we feel about her.
Though adults tend to find her books unoriginal and sloppily written, not to mention all the other complaints that have been heaped on Blyton over the past 20 years, from racism and sexism to snobbery, children keep coming back to her - Lorna Bradbury
An interesting but quite long article, I include the LINK for anyone who is interested. 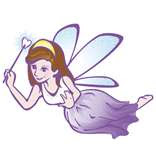 As a child I can remember felling sheer dread as I swallowed a loose tooth along with a mouthful of banana. Dread that I would choke? No, dread that there would be no tooth to leave under my pillow for the tooth fairy.
Tradition has it that the tooth fairy would leave a silver coin for the child who had lost a milk tooth.
That meant a sixpence (2 1/2p) not so long ago (I got 10p) but now the fairy will have to carry more change on her journeys because the average gift has reached ****** (Go on, guess, I'll post the answer tomorrow) with 10% of parents fairies leaving  £5 or more. That would mean £100 for a whole set.
The myth was believed to have originated with the Vikings, who were said to have paid a 'tooth fee' for children's teeth because they were considered  valuable tokens that warded off witches and demons.
I've brought you several articles about cows over the last few months - cows that were played music, cows that had Shakespeare recited to them - but this takes the biscuit OR should I say the oregano?
An answer to global warming may well be sitting on your kitchen shelf.

Scientists have found that feeding oregano to cattle cuts their wind - from both ends - by nearly half. And that's no small matter, for the methane they let loose - mainly by burping - is 23 times more effective in heating up the planet than carbon dioxide.
And now for the Picture Of The Week (click HERE) How cute is this? Bob the meerkat has been young lioness Zinzi's best pal ever since her mother rejected her at birth.

All of today's post comes courtesy of articles in the Daily Telegraph.

Thank you for the informative and entertaining post. It was fun reading it!

Aah, Enid Blyton was my favorite author..I used to be transperted to a magic land which had beautiful tree homes, golliwogs, fairies et all..I still call my nephews when they have a particular kinda haircut - Golliwogs (hope the spelling is ok as it was read eons ago) So when he said waht? with a puzzled expression I knew it was high time he was introduced to Enid Blyton and her magical world.

I had decided this a few months ago and forgot about it..thanks for reminding me.

Thanks for sharing this information. Lioness and meerkat pic. is awesome.

I've always loved Enid Blyton. She has written the most amazing books for children and I have read them again n again.
*psst* just between you and me...I still read them :D
Thanx for that link to an article on her:)

Tooth Fairy Tradition was a first for me.Thanx for sharing it.I m gonna recite it to the next kid I come across :)

That pic of the week speaks volumes:)

OMG that lion cub with the meerkat is priceless. Thank you so much for that link.

My nieces and nephew in the US get 1$ for the first tooth, 2$ for the second, and so on. It gets quite pricy if your lucky enough to have an older one spending the night when one of the teeth is lost. My nephew also swallowed his first tooth. But the tooth fairy came through anyway.

Great post! Looks like inflation hit the tooth fairy too...lol! Interesting fact about the cows...if it's that simple, why not? I'm sure they wouldn't mind a little seasoning on their food...and we could sure benefit from less of their ...um... winds. ^_^

I loved the cow/oregano facts. That sounds like a fairly easy solution. :) When I was a kid I got a 25 cents from the tooth fairy. My kids get $1.50, so go figure. My youngest son swallowed his first tooth that he lost (he didn't even realize he had lost a tooth), so we wrote a note to the tooth fairy in hopes that she would be understanding. We're so thankful she was. ;)

Really nice post! :)
About Tinkers, I really don't know how its going to be - I must add that I've started this book twice so far....
e-Volving Books

Nice one. Cost of living has gone up. Nowadays the average (at least in my circle) it is $1.00.

Thanks for the information. And indeed parents have it hard when a child loses a tooth and puts it under their pillow. Then they need to give their child a lot of money, without really having it. Oh gosh. ;) They really have it tough. lol.

Blyton and her Famous Five and Secret Seven put a very odd spin to the youth of many an Irish Nationlist. Kids mostly from the working class were reading texts from the thirties about uppermiddle class children that had summer holidays.

I loved the excitement of her Famous Five books when I was a child, but when I grew up and revisited some of the stories, the prejudices against working class children glared at me. They are dirty and rude, they lie and steal and are not to be trusted in a proper home.

My kids knew that the tooth fairy who visited our home only paid for the first 8 or so teeth. Molars didn't make it.

Hmmm...wonder if the organo gives their milk a different flavor?

Well, if only I could be like the Blyton woman and write sloppily and very fast, but still get paid for it!
I just love your blog. You have the best news, the best books, and the best pictures. And Good Grief, Happy Anniversary! You don't seem anywhere near old enough to have been married that long. I think of you as a mere child. Loads of love, molly

Another great post! Petty, may I put the cow picture (and humorous words) on my cow blog? :)

ohman, that oregano thing is hilarious- I wonder if it would work on humans. . .I know some people to whom I would like to feed some.
Also, that is the CUTEST picture ever!

As for the tooth fairy, that makes me so happy that it's a Viking myth, though I don't really know why. I'm going to guess the average is the equivalent of $5 US.

Couldn't help laughing out loud over the cow news...

Cute cow by the way

So funny! I love the cow story - too cute. :o) And I love the song from the other day as well - perfect title dontcha think?! Happy belated anniversary if I forgot to wish you that yesterday. On another note, the way you make the post-it notes is through this link: http://wigflip.com/superstickies/

It's super easy! Have fun and enjoy it - next time you can join us on Tuesday to play along. xoxoxo

I wonder if the oregano would have the same effect on my cat?

Many thanks for all your views, I appreciate the time you spend not only reading my posts but leaving your comments as well.

Welcome Vince, it's always good to 'see' new faces, to read other opinions.

Kelly, I don't know about the milk but I'm well informed that it gives the meat a slightly different taste.

Molly, you have me blushing. A mere child (18) when I got married.

Suko, of course you may use both story and picture.

Thanks for that information Trac. I'm going to try this.

Hmm, not too sure about this Jen but do let us know.

The average amount left by the tooth fairy is £1.63. I'm not too sure what that is in dollars.

I happen to know that oregano and olive oil makes a perfect antiseptic stuff.

Thanks, Petty! I hope you will stop by when you get a chance: http://lavacheinteressante.blogspot.com/

Teresa (Read All Over Reviews) said...

Very, very interesting about the oregano!

I appreciate the tooth fairy stuff as I'm going to be donning those wings pretty darn soon!

Another great post! Love the picture of the lioness and meerkat. Too cute!