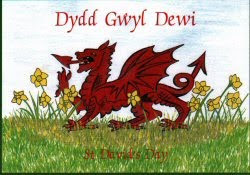 HAPPY SAINT DAVID'S DAY.
Saint David or Dewi Sant as he is known in Welsh is the patron saint of Wales. Living in the 6th century, he came from an aristocratic family, his mother being SAINT NON.
Founder of a large monastery in West Wales, David was one of the early saints who helped to spread Christianity among the pagan tribes of Western Britain and is perhaps most 'famous' for preaching to a large crowd when the ground, it is said, rises up, creating a hill that enables him to be seen and heard by an even greater number of people.
Celebrated by the Welsh since the 18th century, today many people will wear either a daffodil or a leak, both of which are symbols of Wales and the Y DDRAIG GOCH (The Red Dragon, Wale's national flag) will be much more prominent as will the wearing of TRADITIONAL WELSH COSTUME by young girls.
Find out more about Saint David by clicking HERE.
Posted by Felicity Grace Terry at 09:00

Email ThisBlogThis!Share to TwitterShare to FacebookShare to Pinterest
Labels: One For The Diary, Religious/Cultural Celebrations

Kissed by an Angel said...

Happy St David's Day to you too!!! I am so glad that you mentioned it!! I remember, at primary school we used to wear a leek brooch on St David's Day!! It's hardly even mentioned these days!! I had leeks yesterday with my lunch - does that count!!!
I hope you are feeling even better now!!!
xxxx

So glad you're back! Happy St. David's Day!
And man, the Wales national flag is AWESOME! It makes me want to move to Wales!

Happy St David's Day to you too!

Happy St. David's Day.
It is Holi festival for us here, the festival of colours.

Interesting! And since I do have some Welsh ancestry, I guess I will wish a Happy St. David's Day, too!


Think I'd rather wear a daffodil than a leek.

Awesome! Ever notice how saints always do these types of things?...

Maybe its just me.

Its been awhile since I posted comments here. I apologise.

I don't know anything about Saint Dvaid's Day.. But Happy Saint David's Day to you and your family! :)

Cool! Thanks for the info! My I can now tell people my Bday is St. Davids Day!

Aw, I'm a day late to celebrate, but do I at least get credit for having that griffin tattooed on my shoulder (no particular reason other than I was 16 and it looked cool)?

What a great picture! If I wrote children´s books, they would be teeming with dragons and witches.