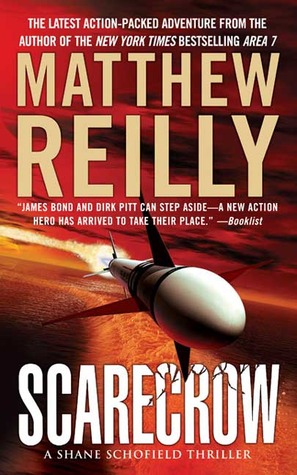 It is set to be the greatest bounty hunt in history ...

FIFTEEN NAMES
There are fifteen targets, the finest warriors in the world - commandos, spies, terrorists. And they must all be dead by twelve noon today. The price on their heads: almost $20 million each.

ONE HERO
Among the names on the target list, one stands out. An enigmatic marine named Shane Schofield. Call sign: SCARECROW

NO LIMITS
And so Schofield is plunged into a headlong race around the world, pursued by a fearsome collection of international bounty hunters ... including the 'Black Night'. a notoriously ruthless hunter who seems intent on eliminating only Schofield.

The race is on and the pace is frantic as Schofield fights for survival, in the process unveiling a vast international conspiracy and the terrible reason why he cannot under any circumstances, be allowed to live ...

He led his men into hell in ICE STATION. He protected the president against all odds in AREA 7. This times its different.

Because this time he is the target.
- Back Cover Blurb

There were twelve of them in total.
Prologue, The Rulers Of The World

Die a terrifying death at the mercy of the tiger sharks, or die quickly and painlessly by their own hand on the guillotine.
Sometimes, when he had a group of people in the pit (as he did today), Killian would offer them Faustian bargains: 'Kill your boss on the guillotine, and I will release the rest of you'; 'Kill that hysterical screaming woman, and I will release the rest of you.'
Of course, he never released anyone. But the prisoners never knew that, and on many occasions they themselves died with blood on their hands.
- Memorable Moment, Page 165

MY THOUGHTS ... The third of what I currently believe to be five books in the Shane Schofield series. Whilst this is perfectly readable as a standalone novel, I found myself so enamoured of Shane Schofield (code name Scarecrow) and his team that I do wish I had read the previous books ... and plan to do so at some point.

As it turns out this isn't the first of the author's book that I've read, a quick search of my blog revealed I had read one of his other books, The Six Sacred Stones (a different series), way back in 2009.

The author's name looking familiar aside, this probably wasn't a book that I'd have picked up; the cover hardly screamed 'read me' ... though that said if I had have picked it up the synopsis may well have convinced me to give it a read. Truth be told, it was one of those 'I'll read one of your books if you'll read one of mine' which saw a friend and I swap books with the view to persuading each other than our choice of reading material wasn't so bad - in exchange for my reading this my friend read one of my all time favourite books, The Five People You Meet In Heaven by Mitch Albom.

Way OTT. Put in mind of just about every action film you can think of played out at breakneck speed, it really is that relentless ... to say nothing of implausible.

Take a shady group of millionaires twelve of the world's most rich and powerful men - one of whom kind of put me in mind of Dick Dastardly such was his love of all manner of dastardly devious traps designed to ensnare (and, in this instance, ultimately kill) his opponents. That they managed to worm their way out of these traps. Honestly, the scrapes (some of them very creative, very creative indeed) these characters ('Scarecrow' in particular) got themselves out of;most of them (I say most because not all of them live to see book 4) seemingly had nine lives ... and then some.

It's all a bit far-fetched. A bit? OK then, so its all very far fetched, ridiculously so and, yes, I do think some of the story was sacrificed in the name of action and, yes, fascinating if that's what floats your boat but personally not for one moment would I have missed all of what I felt was the unnecessary details RE the specifications of the various armaments and vehicles and, yes, at times I did find myself rolling my eyes, thinking 'Yeah right, as if that would happen' but, do you know what, pure escapism, rather surprisingly I found myself lapping up every minute of its 500+ pages.

Edge of the seat stuff, Scarecrow exactly the kind of man I'd want by my side if ever I should find myself facing death by microwave or in a shark infested pit or ... the list of inventive (and often gory ways) of seeing characters off goes on. That amongst the largely male cast of characters there are two wonderfully strong, feisty women for whom the phrase 'kick-ass' might have been coined; that amongst all of the fiendish deaths there was one heart rendering death that left me feeling oddly emotional all to the good.

SUMMED UP IN A SENTENCE ... An OTT non-stop action packed read full of daring doings, highly implausible but my goodness its fun.

Posted by Felicity Grace Terry at 18:18

This sounds like a lot of fun. The plot sounds wild, I think that when it comes to books such as this, far fetched and implausible are not always a bad thing.

The blurb made me think I would enjoy it more in film form... but by the time I finished your review, I decided it might be quite a fun book to read. Definitely outside my usual genres, but never say never... (of course I'd begin with the first book)

Felicity,
Although I am glad that you
truly enjoyed this book, I am
quite uncertain about it. But
I will keep it in mind.
Raven

the cover is pretty familiar, but the story doesn't sound so familiar. i think i would love this, no matter how implausible it might be. :-)

Scarecrow sounds riveting! I'm so glad that you enjoyed it so much. I enjoyed your review, Felicity.

Mitch Albom is my favorite author. I liked Five People You Meet in Heaven. But my favorite is Tuesdays with Morrie. It makes me cry every time I read it.