Today I'm delighted to be sharing my thoughts on Oliver Doliver's Dinosaur Comes to Stay by Papa Perkins. One of several bloggers to be participating in this Book Tour capably organised by Faye @ Authoright, you can find the links to the other blogs below.

Oliver Doliver (who is really just Oliver but he does like having both names) will be mostly Oliver in this story. Oliver is six years (and one month) old and has a friend who is a Dinosaur called Aya Buddn.

This is the story of how they met!

MY THOUGHTS ... The story of Aya Buddin, a lonely little dinosaur, who has 'been to lots and lots of homes' where no-one can even see him, that is until ...

Oliver Doliver's Dinosaur Comes To Stay is a sweet little story all about the importance of accepting both yourself and others for what we/they are.

Aimed at a far younger market than myself, on this occasion I was fortunate enough to have the expert opinion of my four year old assistant, Holly, to hand. If I may hand you over to her.

SUMMED UP IN A SENTENCE ... A heart warming read, too short for my liking but then I can see it being ideal for those times when a quick story is all that is called for.

SOURCE ... Received with thanks from Faye @ Authoright. 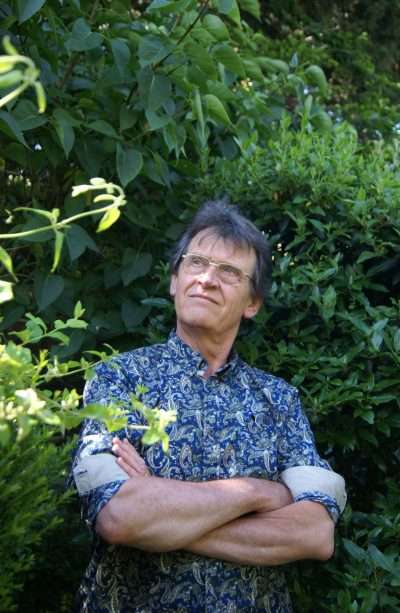 ABOUT THE AUTHOR ... Mark Perkins was born in 1951 and spent his career in art. He is married and lives in Poole with his wife, Avril. They have 3 children and 7 grand-children.

He and Avril bred Burmilla cats for 20 years and they still have 6 for company, along with two miniature dachshunds, two snakes, bantams and a few rather lovely pond fish.

Following schooling near Poole and in Wimborne Minster in Dorset, he attended Bournemouth College of Art for four years and followed this by gaining a teaching certificate from Bretton Hall College in Yorkshire where he met Avril.

Returning to Dorset, Mark took up a post in an advertising studio in Bournemouth and remained there as creative director until 1991 at which time he found teaching art more rewarding and began teaching art to students from ages 12-18.

As well as being a teacher he was elected to full membership of the CSD Chartered Society of Designers in 1983 after 10 years in professional practice. He produced designs for advertising, print and all forms of graphic communication. He specialized latterly in the design and production of large exhibition stands for national and international clients.

Ill-health forced Mark into retirement in 2000, which gave him the chance of pursuing his own interest in drawing and painting for his pleasure; much of which was contained in many sketchbooks, avoiding the necessity of explaining his thoughts to others in a public arena.

Throughout the past few years he has moved from abstract concepts into the more satisfying world of the printed book for children. His printed works include Alphabetcats, A Nature Diary, several volumes of the work of Lesley Anne Ivory and latterly ‘Words, Works & Worlds’ – a compendium of pages from his sketchbooks.

However of all of these, it is writing for children which inspires him most, and even now as he considers the thought of being 70, he reckons it’s not too late to discover what he perhaps should have begun 20 years ago.

He shows some of his later work on his website: http://blueskiesartwork.co.uk/

Posted by Felicity Grace Terry at 18:15

Congratulations to Mark! This book sounds great to share with the gandkids!

It looks like a cute little book. How nice that you had some expert assistance with your review. ;)

Sounds delightful for the kiddos eager for a short yet magical tale.

Most 4 year olds have the attention span of a gnat, so I'm betting that this book was probably just the right length for your little "quality control checker".

I actually think that Holly has a point when she casts her opinion about Oliver. He definitely does look older than 6 and he looks quite a grumpy child, at least when compared to Aya Buddn, who every child would love to have as their friend!

Thanks to you both and Happy Reading together in the future :)

Felicity,
First, congratulations to Mark Perkins!
Aya Buddin's story sounds poignant and
delightful. As well as that the book
conveys such a sincere message. And I
think that the cover looks truly lovely.
And thank you for sharing Holly's opinion.
I will definitely keep this book in mind.
Raven

It's hard to know exactly what age is the 'right' age. I wrote it for Oliver when he was around 3 years old though imagined him older when illustrating him. I do so hope your boys do get to enjoy him and his new fried Aya Buddn. The name, incidentally, comes from one of Oliver's first word combinations that he invented whilst still small. There was another priceless word he used at the same time, which I am reserving for another story, yet to come.

Thank you for the comments which are so very helpful as I work on future titles. My grandson, Oliver, who is now 11 years old is, and actually never was, grumpy. He is just a delight, as indeed is Aya Buddn who has become part of me.
Papa