REVENGE OF THE MIDDLE-AGED HOUSEWIFE. 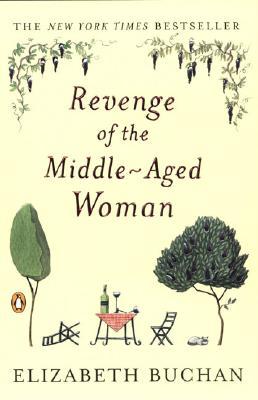 REVENGE OF THE MIDDLE-AGED HOUSEWIFE by ELIZABETH BUCHAN.

Rose Lloyd was the last to suspect that Nathan, her husband of over twenty years, was having an affair, and that he was planning to leave her. But the greatest shock was yet to come; for his mistress was Rose's colleague and friend, Minty.

So Rose was left alone in their once-happy family home, where she and Nathan had brought up their children. Then she started thinking - about the man she'd married, and how well she really knew him. About the carefree yet studious girl she had been before she met him. Twenty years ago Rose had to make the choice between two very different lives. Could she recapture what she nearly chose back then, and bring new meaning to her life now?
- Back Cover Blurb

'Here,' said Minty, my deputy, with one of her breathy laughs, 'the review has just come in'.
- First Sentence; Chapter One

Gone were Richard's flowing locks, replaced with a haircut that looked, frankly, expensive. Vanished, too, were the Indian garments, usurped by a linen suit that looked designer. The duffer in beads looked sleek, groomed, almost dangerous.

His smile had a mocking edge. 'My wedding present to my bride. Like Samson, I have sacrificed my hair to a woman.'
- Memorable Moment; Page 275

MY THOUGHTS ... First things first, the edition I read was produced as a promotional read that came free with a 'women's magazine'. Still, hardly an uncorrected proof, I wasn't expecting all of the not so much spelling errors but the words written in the wrong order that peppered the book through its entirety.

Revenge Of The Middle-Aged Housewife. Hmm! A title that conjures up many things, right?

I grant you that this might say more about me than it does about anything else but when I think of marital infidelity and revenge my mind jumps straight to the very headlines you read in certain magazines aimed at women. You know the kind of thing ... 'Woman rips up the very expensive suits of her unfaithful husband', 'Women leaves uncooked kippers behind the radiators in love cheat's flat before turning the heating on full whilst he's away for the week-end' ... (things that by the way have actually happened). Weelll, there's none of that kind of revenge in this book, its all very disappointingly civil ... that and (I hate to use the word boring) dull.

Predictable and painfully clichéd, the characters lacking in passion. If nothing else I usually find myself despising the adulterer/rooting  for those against whom adultery is being committed as a matter of principle but, no, nothing, I couldn't find it in myself to rouse anything for any of these characters; not Rose, not her cheating spouse (Nathan) nor his new love interest, still less Rose and Nathan's offspring. I guess it comes to something when the only aspect of a book to get me even vaguely excited is the fact that the main protagonist is a book editor.

Posted by Felicity Grace Terry at 15:17

The title sounds like that of a film. I would think that a book like this should have at least a slightly sympathetic main character.

I remember when you first added this to your TBR pile, thinking it had great potential from the title. A shame that it ended up being a yawner. As for the editing.... I can overlook a few errors, but this sounds excessive.

I hope your next book is/was better!

Felicity,
I am truly sorry that this book
was a disappointment. Not to speak
of what you said about all the editing
errors. And I, too hope that your next
book will be better!
Raven

This does sound disappointing.