THE WOMAN WHO WENT TO A BED FOR A YEAR. 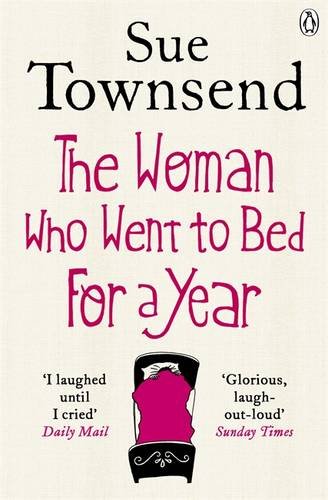 THE WOMAN WHO WENT TO A BED FOR A YEAR by SUE TOWNSEND.

The day her twins leave home, Eva climbs into bed and stays there. For seventeen years she's wanted to yell at the world, 'Stop! I want to get off'. Finally, this is her chance.

Her husband Brian, an astronomer having an unsatisfactory affair, is upset. Who will cook his dinner? Eva, he complains, is attention seeking. But word of Eva's defiance spreads.

Legions of fans, believing she is protesting, gather in the street. While Alexander the white van man brings tea, toast and sympathy. And from this odd but comforting place Eva begins to see both herself and the world very, very differently. . .
- Back Cover Blurb

After they'd gone Eva slid the bolt across the door and disconnected the telephone.
- First Sentence; Chapter 1


Brianne said, 'That's what happens to women when they get to be fifty. It's called the men-o-pause.'

'So, what do they do?' Brian Junior asked.

MY THOUGHTS ... Like most of the author's other books this is based on the absurdity of modern suburban living. However, unlike the author's Adrian Mole series this is where the comparison ends.

Perhaps an unfair comparison to make. After all I'm considerably older and arguably more cynical than when I first came across the books of Sue Townsend all those many years ago. Then again, of a similar age to Eva (The Woman Who Went To Bed For A Year), albeit I don't have an adulterous husband living in the shed nor twins just off to university, I had hoped to find some common ground (other than the occasional desire to go to bed for a year that is) with at least one character (if not Eva than someone else) but alas ...

Quirky/eccentric bordering on pure bonkers ... Hmm!
Taken in isolation whilst many of the characters had personality traits I could relate to and/or found interesting, combined these individual traits equalled characters I just found OTT.

Essentially what I felt to be a pretty unlikable lot; selfish, narcissistic, as the book progressed I found myself becoming more and more frustrated by their actions ...

Though not quite as frustrated as I was by the characters who once introduced played a less than negligible role; their stories left incomplete, abandoned. Or those who appeared so sporadically; who were introduced only to be seemingly forgotten until, what do you know, they re-appeared again just as you'd almost forgotten them. Or, perhaps most frustratingly of all, the character who you felt held such promise; who, enticingly dangled in front of you, were then snatched away before anything became of them.

Nigh on 450 pages long; with sub-plots, none of which are particularly interesting when taken in isolation, a plot that becomes overly farcical, the phenomena that sees Eva with quite a following running out of steam, a social commentary that, way beyond the bleakness that typically underlies the 'humour' of this author's works, is, quite frankly depressing (and, on occasion, grubby) its overlong ... and as for the ending. What can I say about the ending????

Beyond frustrated. Nothing is really resolved. What really prompted Eva to go to bed for all that time? Whilst things are hinted at we don't get to know.

Rated 2 stars (It was OK) on GoodReads, given my review you might be wondering why.

A novel I felt had lots of potential; I did initially find it thought provoking ... that is until it all got really silly and I stopped caring ... and for all of my misgivings it did largely keep me engaged (or at least the first half did), its just a shame that to me anyway it lost its way.

Posted by Felicity Grace Terry at 09:55

Underdeveloped characters can be very frustrating. Character development cab be the most important thing that a book offers. With that, I would also not mind going to bed for a year :)

I wasn't sure what to think of this one at first, but the more I read of your review, the more I decided I probably wouldn't enjoy it. In fact, I'm sure I wouldn't.

Too bad the book wasn't better! Thanks for your honest review, Felicity.

Thanks for your honest review of this book. Sounds funny, though!

It's about too bad about this one....

You aren't on your own in your very 'controlled' review of this book, as I see that the majority of the 1,500 or so Goodreads members who have read it, tend to agree with pretty much everything you have said.

I have to say that the premise does sound very appealing right now, although after about a day, rather than a year, I would probably feel refreshed and bored enough to want to get up and get on with my life. A nice little lie in would do nicely for me!!

The Adrian Mole series, is another of those cult reads, similar to the Harry Potter books, which I have never had the slightest inkling to read, although by now I am probably in the majority of ONE!

Sorry this one didn't do it for you, but as you say, no book is ever that bad that I would turn it away, if it was all there was to read :)

Sorry this was frustrating, appreciated reading your thoughts.

Felicity,
I am sorry that this was such
a frustrating book. But as
always I appreciate your honest
and excellent review.
Raven

Thanks for your honest review you are great.

this sounds like such a fun premise. too bad it kind of went off the rails.

Sometimes I struggle with stories that focus on a person's domestic life that never quite let you know the well. Bummer it left you bored.

Such an intriguing premise, but I'm sorry it wasn't executed well. It's tough when you can't connect to any of the characters - and man, this is a long book!