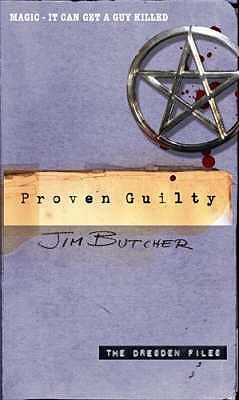 Faeries.
Black magic.
And a genuine fallen angel living inside your head.
It never rains but it pours.

Harry Dresden is the only wizard in the Chicago phone book. He consults for the police department on 'unusual' cases and has even appeared on talk shows. and this makes him no friends in the White Council of Wizards, who find Harry brash and undisciplined. However, now vampire wars have thinned out the wizards a little, they need him and he's assigned to investigate rumours of black magic.

Harry's other problem is an old friend's daughter - all grown-up and in trouble already. Her boyfriend insists he's innocent of what looks like a supernatural assault straight out of a horror film. This impression turns out to be . . . well, pretty accurate, as Harry discovers malevolent entities feeding on fear in Chicago. All in a day's work for a wizard, his dog, and a talking skull named Bob.
- Back Cover Blurb

She turned, took half a step, and there wasa sudden gust of frozen air that knocked her mostly full glass of lemonade onto the floor. It froze in a lumpy puddle. Somewhere between tabletop and floor, Maeve vanished.
- Memorable Moment; Page 180

SOURCE ... Given to me by a friend, thanks Aspen.

MY THOUGHTS ... A series I've dipped in and out of over the years ... and not necessarily in order. Whilst probably not my favourite book in the Dresden Files nevertheless this, the 8th book in the series, is as sardonic and action packed as ever and yet ...

And yet, slightly disappointed that for all of this there was the sense that this was one of those books the main purpose of which was to get from one book to the next; a ploy if you will to get Harry and Co where they needed to be.

A character that has always managed (only just) to stay on the right side of being a total lech when it comes to the ladies. In Proven Guilty I, I had a problem with, maybe not so much Harry as with what I felt was the author's blatant sexualizing of Molly who, at 17 is young (in some places underage); a sexualization which saw Harry unashamedly wondering if she had her vulva pierced (yes, really) that made me feel distinctly uncomfortable; a sexualization which had me thinking that, yes, arguably depicted as strong and feisty but are ALL the women in these books defined by their bodies; as porn stars? Not something I've ever particularly picked up on before but given this book I have my suspicions.

I'm guessing an issue that has lurked there since the first Dresden File I read. Will this become increasingly problematic as the series continues? Who can tell but I certainly hope not as I've previously enjoyed the books (even this one, my concerns aside, I otherwise thought an OK read); have enjoyed (if not necessarily liked) the characters, have engulfed myself in the various story lines and the memorable world building.

I've read and enjoyed a couple in this series, but I haven't picked one up for years.

I can see how the sexualization of characters would be very oft putting here. I assume that the author is not being critical of such things in an ironic way.

I pretty much got my fill of vampires and that ilk a few years back, but I'll admit to being intrigued by Bob, the talking skull. :) That might be the only thing that appeals from what you've shared here. Well... the dog, too.

Felicity,
Any sexualization of characters
would put me off. And I am uncertain
about this series.
Raven

I confess that I only tried book 1 in this series

I love this series, though I am not as far along as you.must get back to it.

I've never really picked up on the sexualization of women in his books--not that it isn't there--just that I haven't caught it, sad to say. I'm always so caught up in everything that is going on.

Felicity, this book and series are new to me. I'm glad you enjoyed it overall.
Have a relaxing weekend.

I've read every book in the series as well as the novella and short stories, and I'm awaiting the next (as yet, unreleased) book. I do remember in a previous book Harry feeling guilty for any untoward feelings towards Molly.

I like to read series in order (I've been known to go and get the first couple of books in the series having just been given the 3rd!). I'm currently around halfway through the mammoth series that is Terry Pratchett's Discworld, but yet it is not one I want to end (though obviously know that it does!).