ANATOMY OF A DISAPPEARANCE . 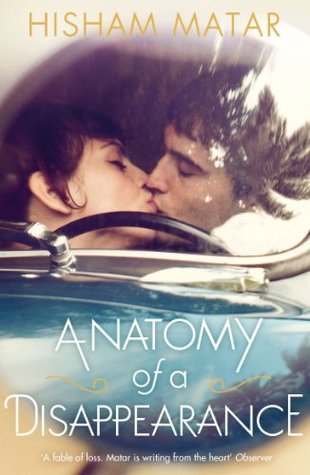 ANATOMY OF A DISAPPEARANCE by HISHAM MATAR.

In Egypt, Nuri, a teenage boy, falls in love with Mona - the woman his father will marry. Consumed with longing, Nuri wants to get his father out of the way - to take his place in Mona's heart. But when his father disappears, Nuri regrets what he wished for. Alone, he and Mona search desperately for the man they both love. Only for Nuri to discover a silence he cannot break and unimaginable secrets his father never wanted him to know.
- Back Cover Blurb

There are times when my father's absence is as heavy as a child sitting on my chest.
- First Sentence; Chapter 1

For my 'Memorable Moment' see My Thoughts below.

MY THOUGHTS ... One of those books perhaps best filed under 'Not a read for me'.

Suddenly her beauty would look sorrowful: a fruit bruising in front of my eyes.
- Pg 149

.... I found that the night had wrapped us even tighter, coiled her bare thigh round my waist and pushed mine up between her legs. Like branches of a tree, each limb had found its natural way.
- Pg 152

I'm afraid I just found the prose all a bit, well, too flowery for my liking.

Not that the prose was the only thing that wasn't to my taste ...

Disappointed by the writing of the characters. That I found the female characters all a bit, well, meh! That I never felt I particularly got to know any of them (male or female). That Nuri in particular remained just beyond my grasp; that he never seemed to evolve in the gap between us meeting him as a boy (a boy I couldn't relate to it has to be said ... I mean it isn't your average twelve year who removes a thorn from a unknown woman's toe unbidden, is it?) and his graduating thirteen years later.

Frustrated by all of the aspects of the story that alluded me;  the threads that just somehow fizzled out, the 'questions' that went unanswered ... come to think of it I don't know which was worse this or the questions that were never even addressed. Ultimately there were so many elements introduced and yet very little closure.

Quite frankly I became bored by what I perceived of Nuri's Oedipal relationship with his stepmother and, most of all, by the deaths and disappearances that enticed us on to chapters in which nothing much actually happened.

Then, then there's the ending. Was this the dramatic twist in the tale that had been hinted at throughout? Oh dear! Talk about an anti climax.

Posted by Felicity Grace Terry at 10:46

Sorry this was a miss for you! It's tough when you can't really "connect" or "understand" the characters - where they just seem a bit too elusive if you will. I think the writing would be too flowery for me too though.

I give you credit for finishing! Seems angst-filled which is why I tend to avoid books that feature teen main characters. Just not for me.

I was already thinking "no" as I read the blurb, then your review confirmed it. Like Mary, I give you credit for finishing.

Felicity,
I am sorry that this book was
a disappointment to you. And as
always I appreciated your honesty.
I do not think that I would appreciate
this book.
Raven

uh oh...not for you, anti climax. sometimes the ending can make or break a book for me
sherry @ fundinmental

Sorry this one wasn't for you. The ending sounds disappointing too! Sometimes a unique twist can make a so-so story better, but it doesn't sound like this was the case for you. Thanks for sharing. :)
~Jess

Felicity,
Thanks for your honest words. I don't think this book would be to my liking, either.

I wouldn't like all that flowery prose either. It takes away from the story. Sorry that this one wasn't a good read.

Uh, huh. Seems the ending was anticlimax with nothing major happening? I don't think I'll like it either.

Ugh. This does sound disappointing. Hopefully your next read was much better.

Oh yikes...that does sound too flowery. I was turned off by the premise though so your review just cemented things for me.